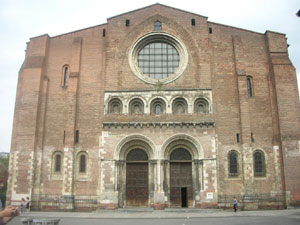 In 1080 AD, the church of St. Sernin in Toulouse was a busy place. Charlemagne had given the church some saints‘ relics, and many people stopped to pray there when they were on pilgrimage to St. Jacques de Compostela in Spain. But the little old church, built in the 300s AD under Roman rule, was too small and too old now for these crowds. So the Counts of Toulouse decided to build a big new church in the new Romanesque style. That would show that they were rich and powerful, and not (as actually happened) about to be conquered by the kings of France! 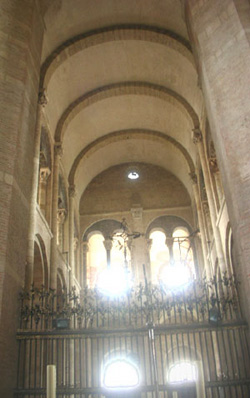 The walls of the nave are heavy and solid to hold up the barrel vaulted stone roof. There’s a tall rounded arch, and then above that a tall gallery. Long brick buttresses support the walls.

While most Romanesque churches have plain, flat apses, at St. Sernin they needed a lot of room for pilgrims to walk around, even while the priest was saying Mass, so there is an ambulatory, an aisle, that goes all the way around the apse of the church. 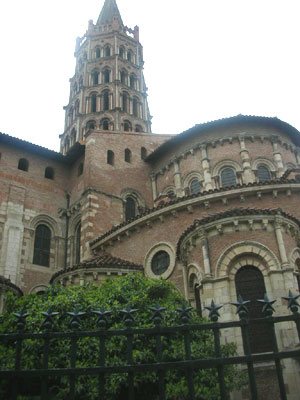 As in earlier Carolingian churches in France and Spain, the bell tower rises from the place where the nave crosses the transept, on the roof, instead of standing next to the front door as in the Abbaye aux Dames. (The top two floors and the pointy spire were added later).

Learn by doing: where would you go on pilgrimage to?
More about Romanesque churches
The Kings of France defeat the Counts of Toulouse