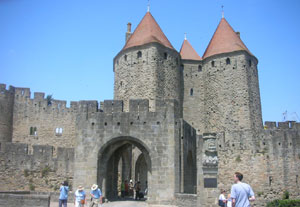 Carcassonne, on top of a hill where you can see for miles, has always been important for any army that wanted to control southern France. It controls a crossroads where a big road from the Atlantic Ocean to the Mediterranean Sea crosses the main road from France to Spain.

More about castles
Medieval architecture
All our medieval Europe articles

When was the first castle at Carcassonne?

By about 500 BC, Celtic people already had a fort at Carcassonne. When the Romans conquered Gaul about 100 BC, they built a new, stronger fort. Some of that fort is still part of the castle today.

Carcassonne in the Early Middle Ages

Who were the Visigoths?
Umayyads and Islamic Carcassonne
Franks and Merovingians

The Counts of Toulouse

The Merovingian kings gave Carcassonne to the Count of Toulouse. By 1000 AD, the Counts of Toulouse were pretty much independent of the weak French kings, and when the king told them what to do they didn’t pay any attention to him. 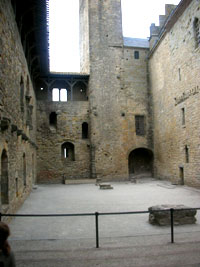 The central castle at Carcassonne

These Counts of Toulouse decided in 1067 to build a new, stronger fort at Carcassonne to replace the old Visigothic fort. They built the inner castle, with a well inside it so they could get water without having to leave the castle, and narrow windows to shoot arrows out of.

But by 1209 AD the French kings had gotten stronger – possibly thanks to climate change – and they captured Carcassonne from the Counts of Toulouse.

The French used Carcassonne as a main fortress to defend their border with Spain, and they built yet another wall around the outside to make it even stronger.

Here’s Quatr.us’ movie tour of the castle of Carcassonne.