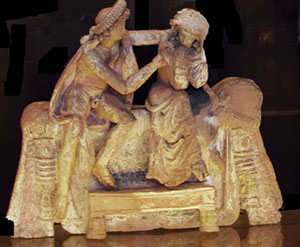 Plato also suggested a theory about why people fall in love. He has his character Aristophanes tell a story about love. Once upon a time, says Aristophanes, everybody had four legs and four arms, and one head with two faces looking opposite directions, and they were whole people. But then, to make people weaker and less dangerous, the gods split them in half: only two arms and two legs each, like people today. Some of these halves were men, and some were women. Everybody went wandering all over looking for their other half, to join up with again. Sometimes your two halves are both men, and sometimes they’re both women. Sometimes they’re one of each.

Aristophanes was a comedian, so this is probably meant to be funny. But it’s not really by Aristophanes – it’s by Plato. Does he mean just to be funny? Is he being sarcastic about the real Greek religious stories? Or is he being sarcastic about Hindu religious stories that may just have been reaching Athens about this time? Or could both stories come from an earlier Indo-European tradition?

Learn by doing: write your own myth about why people fall in love
Plato’s ideas about forms