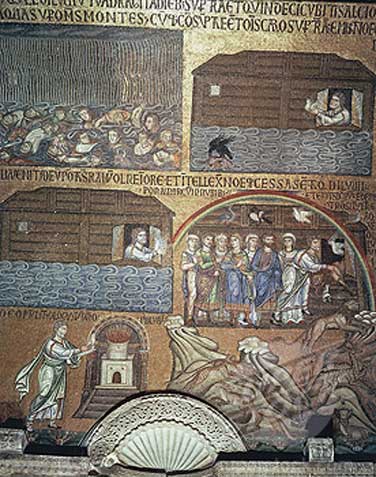 The rain falling on the drowning people/ Noah lets go a dove to see if the waters have gone down/ He sends out the dove again/He lets the animals off the boat/ He sacrifices to God on an altar (Mosaic from St. Marks, Venice, 1200s AD)

According to the Book of Genesis in the Bible, things went on more or less peacefully for a long time after Cain and Abel. Seth’s children and grandchildren populated the earth so that there were people all over the place. But these people got to be bad, and did not live the way God wanted them to. So God decided to kill them all.

God tells Noah what to do

But there was one good man, Noah. What to do? God decided to save Noah and just kill everybody else. So God told Noah to build an enormous boat, and inside it put his stuff and two of each kind of animal, a girl one and a boy one. Then he and his wife and his sons and their wives should all get in. 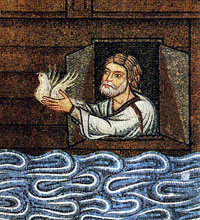 So Noah did just that. Then God sent a huge flood which wiped out every person on earth except Noah and his family. The flood destroyed all the houses and animals and everything too. It rained for forty days! That’s more than a month! To see if the flood was over, Noah sent out a dove. When the dove came back with a branch in her mouth, Noah knew the flood waters were going down.

When the flood was over, Noah and his wife and his sons and their wives got out of the boat. They began a new society that would listen more to what God wanted. God set a rainbow in the sky as a sign that he would never send such a flood again. 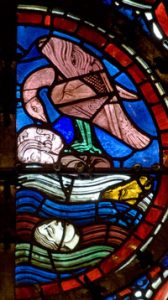 Ravens eating the bodies of the drowned people after the Flood (Chartres Cathedral, 1200s AD)

Though here is a story that didn’t make it into the Child’s Bible. After Noah got off the Ark, he planted grapes. When the grapes were finally ripe (which must have been years later), he made wine with some of them, and he got drunk. He went into his tent and he fell asleep on his bed, naked and drunk. 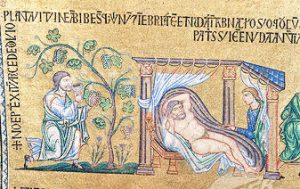 When his youngest son Ham came to get him, he found him there, and he went and told his brothers that Dad was drunk and naked, ha ha. But Noah’s older sons were sorry for him and covered him up, walking backwards so they wouldn’t see their dad naked. God said that was the right thing to do (Genesis 9).

Most ancient cultures have a story about a big flood. Compare the Sumerian story and the Greek story. Archaeology suggests that there really was some sort of terrible flood in Mesopotamia about this time (say about 3000 BC), though not as big as the story says.

The part about Noah getting drunk is another example of the fights between nomads and farmers: wine is something only farmers have, so mainly farmers drink it. You have to be settled somewhere to grow grapes for wine, and it takes years between when you plant the grapevines and when they yield any decent grapes. So nomads, like the Jews, tend to think of wine as an evil farmer’s thing, which gets decent people in trouble.