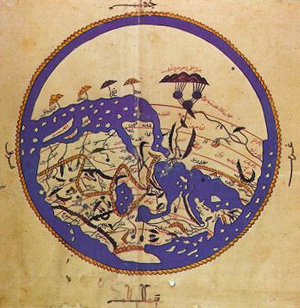 Universities in the Islamic Empire

Silk Road and Indian Ocean trade made many people in the Islamic Empire rich enough to send their sons to college. So the big university at Alexandria in Egypt stayed open. But the university moved from Alexandria to the nearby town of Fustat, which we call Cairo.

A new university also opened up in Baghdad. Baghdad was another new city, near ancient Babylon (in modern Iraq). There were also smaller Islamic universities in Tunis (in Tunisia near ancient Carthage), Cordova (Spain), Fez (Morocco), and other cities.

A copy of Ptolemy’s map of the world

At all of these universities, geographers kept working on drawing better maps of the world. They built on the work of the earlier Egyptian geographer Ptolemy. They talked to travelers and traders to find out what the world looked like. Then they used these facts to draw better maps. For example, Islamic geographers knew that the Pacific Ocean lay on the other side of China.

A medieval Islamic map of the world

Can you see how al-Idrisi’s map represents Europe, Asia, and Africa? Look at it carefully. North is toward the bottom of the map. The big land mass at the top is Africa. Under Africa to the right is the Mediterranean Sea, and below that is Europe.

Under Africa to the left is the Indian Ocean. And between them is the Arabian Peninsula. At the far left are India and China. Compare this map to a modern map. Is the medieval map accurate? Would it be useful to travelers?

Get your own map of the world!

One very famous Arabic-speaking geographer from North Africa was al Idrisi, who worked in map-making (among other things) in the 1100s AD. In the 1300s AD, there was another famous North African geographer. His name was Ibn Battuta.

Learn by doing: draw a map of the world today and compare it to this medieval map