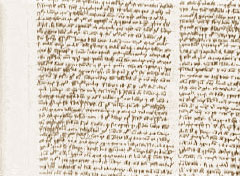 A book in Thomas Aquinas’ handwriting

For many years before Thomas Aquinas was born, men like Ibn Sina and Ibn Rushd in the Abbasid Empire had been reading the Quran, and reading Aristotle, and trying to find ways to get these two important books to agree with each other. They were trying to explain how the universe worked in a way that honored both God and science, without leaving any contradictions.

Then in the 1100s AD, the Jewish philosopher Maimonides tried to do the same thing for Judaism, finding how Aristotle could work with the Torah (the Jewish Bible). When Thomas Aquinas was a young man, studying in Cologne and Paris in the 1200s AD, he read Latin translations of Maimonides, Ibn Rushd, and Ibn Sina, and he decided to do the same thing – he would figure out how Aristotle worked with Christian beliefs. Since the fall of the Roman Empire, hardly anyone in Europe had even read Aristotle (though Roger Bacon had). At the same time, Aquinas wanted to show that Christianity was the true religion, and not Islam or Judaism.

Aquinas agreed with Ibn Rushd or Maimonides about some things. He agreed with Maimonides that God didn’t really look like a man, but was more like a spirit or idea. But Aquinas disagreed about other things. Ibn Rushd thought that when you died, your soul mixed back into one big soul, and some Christian scholars in Paris agreed with him, but Aquinas insisted that each soul remained itself and lived on after death, in heaven.

Thomas Aquinas disagreed with both Ibn Rushd and Maimonides about why people should be good. Maimonides said that God had given people practical laws to show them the way to happiness on earth – even if God had not been involved, these rules would show you the way to happiness. Ibn Rushd said (thinking that your individual soul did not survive after you died) that if you lived by God’s rules (Shari’a) you would be happy on earth, although intelligent people who also studied philosophy might find a truer happiness. But Aquinas thought that people should mainly be trying to get happiness after death, by being with God in Heaven. You should follow God’s laws because that was the way to Heaven. Aquinas added that to get to Heaven, you had to truly love God, and if you loved God, you would naturally also love goodness, because God is good. 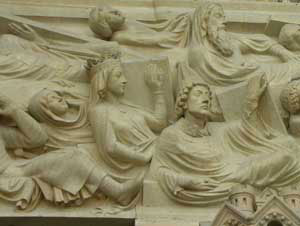 Souls rising up to go to Heaven, from Notre Dame cathedral in Paris (about 1250 AD)

Thomas Aquinas also did not always manage to make Aristotle’s ideas agree with Christian ideas. Aristotle had seen the universe as eternal, with no beginning or end. Aristotle thought that the universe had always been there and would continue forever. Christianity told Aquinas that God had created the universe, and that it would end with the Last Judgment of Christ. Like Maimonides, Aquinas took the Judeo-Christian view that there had to be something that started off the universe, and that this was one of the proofs that there really was a God.