Stars don’t last forever, though they do last for billions of years. And they don’t stay the same throughout their existence – they change over time.

The earliest beginning of a star is called a nebula. A nebula is a cloud of hydrogen and a few helium atoms hanging in space. Sometimes a nebula just stays at this point. But if the cloud gets thick enough, with enough hydrogen atoms close enough together, it can become a brown dwarf. A brown dwarf is a small star that is not quite big enough, so there is not enough gravity to start the nuclear fusion process. Brown dwarf stars hardly shine at all, but they’re not very common either. 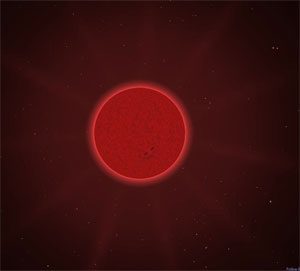 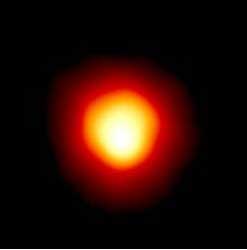 The red giant star Betelgeuse (thanks to Hubble Space Telescope) 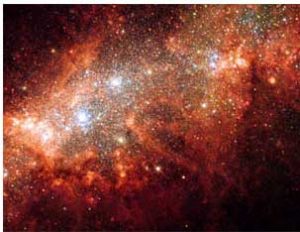 When all of the atoms inside the supergiant star are done changing into heavier atoms, they end up as a big lump of iron in the center of the star. When this happens, the supergiant explodes in a huge supernova. After the supernova is done exploding, it leaves behind a tiny, dense star with a lot of atoms crowded into a very small space. This is a white dwarf. All around the white dwarf, there’s a big cloud of dust from the supernova’s explosion. This is a new nebula, and after about ten thousand years it will recycle the old star’s atoms into a new star. Eventually the white dwarf will cool off completely and become a black dwarf.

The biggest stars, the ones at least eight times as big as our sun, behave a little differently. When the supergiant collapses, instead of a white dwarf, you get a nebula and a neutron star or a black hole. Then the nebula gets to work making itself into a new star.

Bibliography and further reading about stars: