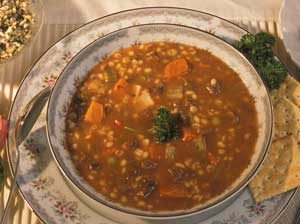 How to make barley soup

You can eat like a medieval peasant by making your own barley soup at home. Start by peeling a carrot, a turnip, a parsnip, and an onion. Chop them up into bite-size pieces. Also chop one stalk of celery and two cloves of garlic.

In a large pot, put one quart of water, 1/2 cup of uncooked barley (you’ll find it in the bulk foods at the grocery store), and all the vegetables. Add a can of chickpeas too and a pinch of salt, a pinch of pepper, and a handful of any other chopped herbs you have around like parsley, rosemary, thyme, or oregano.

History of chickpeas
Where does pepper come from?
History of salt

Bring the pot to a boil and then simmer over low heat, covered with a lid, for an hour. If the soup gets too thick, add more water.

How to make barley pudding

To make a classic Turkish barley pudding, take a cup of barley and boil it in 2 cups of water with a pinch of salt. When it boils, simmer it covered for an hour until the barley is very soft and has soaked up the water. Then add a cup of sugar and 2 cups of milk and pour the mixture into a greased bread pan.

The Ottoman Turks
Medieval Islamic food
Where does sugar come from?
What about cinnamon?

Preheat the oven to 350 degrees and put a roasting pan half full of water in the oven. Carefully put the barley pudding into the water, so that the water comes about halfway up the sides of the bread pan. Bake for half an hour and then stir; then bake for another half an hour. Add 1 cup chopped walnuts (if you like walnuts) and a handful of raisins and mix the pudding, then sprinkle it with cinnamon and bake for ten more minutes or until the pudding is set. Good warm or cold.