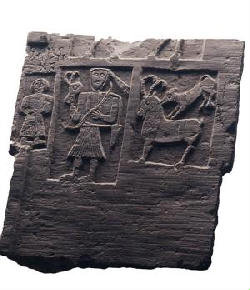 The first people there

Arabian geography
History of pearls
All our West Asia articles

Mostly they gathered seaweed and seafood, and fished from their boats. By about 2500 BC, Arabian traders were selling local mother-of-pearl and pearls to the Sumerians and Egyptians.

The south-western part of the Arabian peninsula (modern Yemen) gets more rain than the north or the east, and so people began farming there more than in the other areas. Even in this area, there isn’t very much water, and so beginning about 1700 BC people built huge earthen dams across the streams to store up water for irrigation. (Was this a response to the drought about 2000 BC?) The people of Saba were rich enough to build big stone palaces.

What is irrigation?
Where is barley from?
A Bronze Age drought

The Queen of Sheba

The Queen of Sheba who the Bible says visited King Solomon in the 900s BC was probably the ruler of a kingdom in this area. By about 750 BC, the famous Great Dam of Ma’rib, the biggest dam of all, stored water for the whole region around the city of Ma’rib. In 500 BC, Yemen’s leaders made the dam even bigger, to store even more water.

Who was King Solomon? 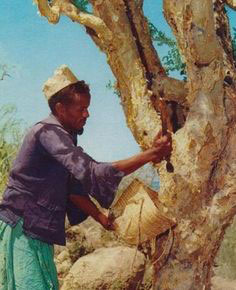 Gathering sap from a frankincense tree

In the north and the east of the Arabian Peninsula, most people did not settle down and farm, because there wasn’t enough rain. Instead, they became shepherds, and herded sheep all around the peninsula, going from one grassy place where there was water to another. Mostly these people rode donkeys. Because they were always travelling around with their sheep, many of these shepherds also became involved in trade.

Where are donkeys from?
How about sheep?
West Asian economy

It turned out that the trade was a lot more profitable than the sheep were. People from Egypt and Syria always wanted to buy things from India, and people from India always wanted to buy things from West Asia, so there was always trade going on. Some of this trade went by sea, from India around the Arabian peninsula and then up the Red Sea, but other times traders crossed the Arabian peninsula with caravans of donkeys. 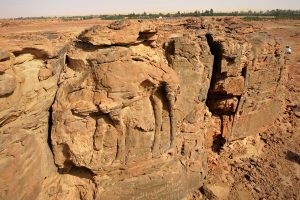 Camels carved into a cliff by the roadside in the Arabian peninsula (modern Saudi Arabia), about 1-100 AD

What did they sell?

Where does cinnamon come from?
How about Persian carpets?
History of glass

Arabian rulers themselves forced enslaved people to dive for pearls, and also to gather perfumed incense – frankincense and myrrh. They sold great quantities of these things to West Asia, Central Asia, Egypt, and Europe at high prices.

Around 500 AD, thanks to improvements in camel saddles, these traders began to use more camels than donkeys to move their trade goods across the Arabian Peninsula.

Where are camels from?
Early history of steel
What are mercenaries?

New trade goods appeared: East African gum arabic, Indian steel and sugar, Central Asian paper and Chinese porcelain. But there were more changes too: about the same time, Roman traders figured out how to sail down the Red Sea and around the Arabian Peninsula to India, and cut out the Arabian middleman; also more trade began to go further north, by way of Palmyra.

Many men in the Arabian peninsula began fighting instead as mercenaries for the Roman Empire and the Sassanian Empire, who were always fighting each other. That brought in money. 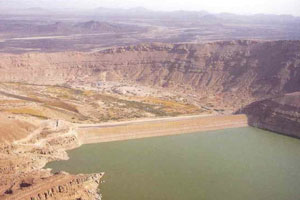 But at the same time, there was a catastrophe: after some centuries of slow decline, the great dam at Ma’rib became too old to keep up anymore. Too much silt (dirt) had piled up behind the dam. In 570 or 575 AD, the dam finally broke. There was no more water for the fields, and thousands of people had to move out of Yemen to find new land.

The rise of Islam

Does the combination of displaced people, mercenary soldiers who knew just how lame the Roman and Sassanian armies were, and plenty of money from trade help explain the rise of Mohammed and Islam? Yes.

Learn by doing: go visit a big dam near you and see how it works
Go on to the life of Mohammed

More about the geography of the Arabian Peninsula

Arabia and the Arabs: From the Bronze Age to the Coming of Islam, by Robert G. Hoyland (2001).