West Asia is located in the middle of the very wide land mass we call Europe and Asia and Africa, and so it has always played an important part in moving things from east to west and from west to east.

Beginning as early as the Stone Age, about 7000 BC, people in West Asia were buying obsidian from the Greek islands, and ostrich eggs and ivory from Africa, and spices like pepper and cinnamon from India. West Asian traders made a profit by acting as go-betweens or middle-men for this east-west trade. They traded the pepper and cinnamon they got from India for the ivory and obsidian and donkeys they got from Europe and Africa. 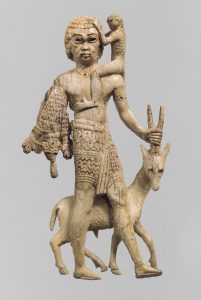 An ivory from the 700s BC showing a Sudanese man with an oryx, a monkey, and leopard skins from Africa, bringing them to the Assyrian king Assurnasirpal II

But West Asians also made things to sell to their neighbors. They made glass beads, linen and wool cloth, and knotted carpets, and in the Arabian Peninsula people dove for pearls.

Also, because West Asia is very dry and doesn’t get much rain, and has been crowded with people for thousands of years, the people of West Asia bought a lot of raw materials from northern Asia (modern Russia and Georgia). They bought wood, and furs, and slaves, and horses. In exchange, West Asian traders sold the northern people fancy perfume and wine.

At least since the Bronze Age, people in West Asia depended on this east-west trade. When the trade went well, West Asian people were rich and happy. When it went badly (often for reasons beyond their control), they were poor and angry. For instance, Cyrus’ creation of the Persian Empire in the 500s BC opened up the Silk Road, and made West Asia rich. And trade between the Han Dynasty in China and the Roman Empire in Europe starting about 100 BC made the Parthians and then the Sassanians rich.