European science in the 1800s 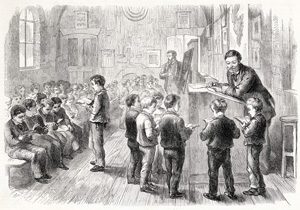 European boys at school in the 1800s

In the first half of the 1800s AD, countries in northern Europe like France and Britain forced other countries to give them food. European armies conquered India, Ghana, Nigeria, Canada, and other places. Europe made those places poorer while Europe got richer.

That meant that many people in northern Europe could stop farming and get an education. Families sent more boys to school than girls, so most of the educated people were men. This new crowd of scientists built on the work of the Enlightenment and on each others’ work.  They figured out a lot of new things about how the world worked. 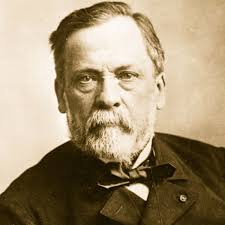 Louis Pasteur, who figured out how to keep germs out of our food

Some of these scientists tried to cure diseases like tuberculosis and cholera and malaria. Men like Louis Pasteur used microscopes and experiments to figure out what germs were and how they spread. He showed the importance of drinking clean water and washing your hands.

What is a microscope?
Why was cholera a problem?
What is malaria?

Other scientists like Friedrich Wohler worked in chemistry. They figured out how atoms combined to make molecules. They learned how to make chemicals in a laboratory. Alessandro Volta built the first electric battery.

James Maxwell figured out how electricity and magnetism and light related to each other. Scientists like Marie Curie worked with radioactivity and asked what atoms themselves were made of.

Scientists also figured out how to make cheap steel. They used rubber from South America to cushion steel parts for machines. With coal and oil, they built the first engines. All kinds of new things came from this: forks and spoons, bicycles, cars, and tractors.

History of steel
Where does rubber come from?
What was coal good for?
Invention of bicycles 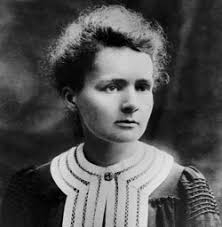 Marie Curie, who worked with radioactivity and invented X-ray machines

Who was Napoleon?
What were the Pyramids?

Many scientists got interested in the new places and people and animals they saw. Geographers and historians travelled to Egypt with Napoleon and saw the Pyramids.

They worked to find out more about ancient Egypt. Franz Bopp realized that the Indian language Sanskrit was related to the other Indo-European languages.

Charles Darwin travelled to the Galapagos Islands. He figured out how evolution worked.

Meanwhile, most kids in the other countries had to work hard farming and couldn’t go to school. So they couldn’t learn about science or discover new things when they grew up.

Science in the United States