History of Bicycles – Steel and feminism 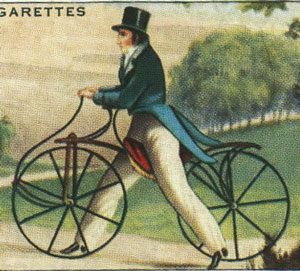 Bicycles were invented bit by bit in many different countries. They grew out of earlier inventions like wheels (from Central Asia) and wheelbarrows and cranks (from China), but Karl von Drais, a German inventor, built the first riding machine with two wheels, one in front of the other, that you had to balance on, in 1817. Like wheelbarrows, this machine was made of wood. It had a front wheel and handlebars you could steer with.

A fad for velocipedes

This machine didn’t have any pedals – you had to push it along with your feet like a skateboard – but rich young men loved it anyway. So a lot of inventors started to try to figure out how to make money selling better ones. Meanwhile, some cities banned “velocipedes” as too dangerous for city streets, and fined riders.

Velocipedes could only get so far as long as you had to make them out of wood. It was really the invention of cheap steel with the Besemer process in the 1850s that made modern bikes possible. Inventors jumped at the chance. By 1864, a French metalworker built a steel bike with pedals on cranks (also a Chinese invention) attached to the front wheel, and rubber tires (a South American invention). 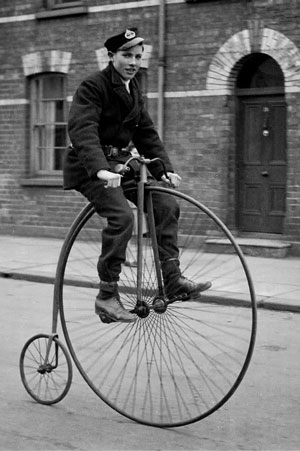 Bikes spread all over the world

These bikes soon used enormous front wheels to make them less wobbly, but it was hard to steer using the same wheel you were pedaling with. They spread all over Europe and into Russia, the Ottoman Empire, Iran, India, and Africa. When the United States forced Japan to open up to world trade, lots of Japanese people started riding bikes too. 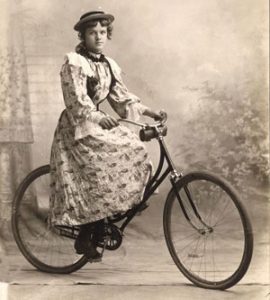 The “safety bicycle” with a chain

By 1885 English manufacturers were making much better “safety bicycles” that you could pedal with a chain attached to the back wheel. These bikes could have both wheels the same size, and they were much easier to ride.

How is a bicycle feminist?

As part of the women’s rights movement at this time, many women started to ride bikes so they could get places without being assaulted walking on the street – women called bikes “freedom machines”, and started to wear pants and shorter skirts so they could ride better. On the other hand, the rubber for their tires came from the work of enslaved people in Congo. 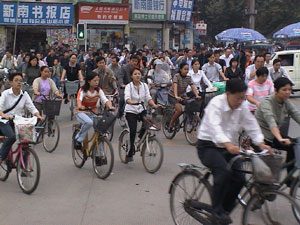 By 1900, people were riding bikes all over the world, and by the 1950s, the Chinese government announced that they wanted every person in China to have a bike – but the new freedom of women made other governments nervous.

Today the Iranian government doesn’t let women ride bikes. And in Saudi Arabia woman can only ride bikes in parks – not to get anywhere.

Bibliography and further reading about the history of bicycles: