Europe’s economy in the Renaissance 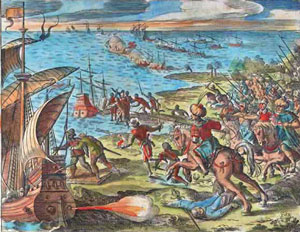 The Portuguese force Islamic traders to give them access to the Indian port of Goa (1500s AD, Theodore De Bry)

In 1500 AD, Europe was still a marginal player in the world economy, which was centered on Central Asia. Europeans sold mostly raw materials – fur, silver, timber, and amber, to Central Asia via the Silk Road. And the Europeans bought mostly finished products. They bought silk from China, but mostly they bought the products of Central Asia itself. That included the best steel, cotton cloth, horses, pearls, knotted wool carpets, and medicines like black pepper and cinnamon.

But by 1500, Europe was selling more manufactured things too. European traders sold wool cloth, paper, steel, and sugar. Most of this trade travelled by ship from India and the Persian Gulf around the Arabian Peninsula and up the Red Sea to Egypt, and then across the Mediterranean on Egyptian, Genoan, or Venetian trading ships.

In the late 1400s, Portuguese ship-builders figured out how to build better ships and better guns than the Indian and Iranian trading ships. Traders used those ships to sail around Africa to India and Southeast Asia. The Portuguese forced local rulers to give them access to the good ports. They forced Indian and Central Asian merchants to sell them their cotton cloth and their medicines. When Islamic traders tried to sail their ships, the Portuguese navy sank the ships. Soon they put the Indian and Iranian traders out of business. Some of the Portuguese ships took the old route around the Arabian peninsula and up the Red Sea to Egypt. But more and more of them sailed around Africa directly to Europe. That way they could cut out the Italian merchants too. Venice and the rest of Italy began to get poorer. 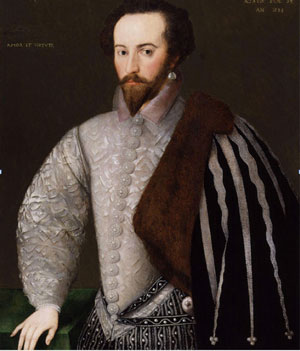 Europeans used the money they made from shipping to buy some cool stuff. But they knew they could buy more Silk Road things if they had more things to sell too. Europeans were used to selling silver and furs, and they found those things in the Americas. There was plenty of silver and pearls in South America. There were plenty of furs in North America. Spanish traders used their guns to force Native Americans to mine silver and dive for pearls for them. British traders bought huge piles of furs from Native Americans in exchange for steel knives, glass beads, and wool and cotton cloth.

By the end of the 1500s, Portuguese sailing ships were carrying most of the world’s trade. Europe was buying more and more of the world’s stuff. More European traders expanded into making the things they used to buy. Europe used British coal to run blast furnaces and make steel. More poor Europeans were working for a boss in a workshop instead of on their own farm. As Britain’s population grew, Britain started to run out of firewood. More and more people started to burn coal for heat. Most importantly, Europeans brought African people as slaves to the Caribbean islands and to Brazil to grow sugar. But the Europeans were also buying new things: tobacco, from North America, chocolate, from South America, and coffee, from East Africa.

Copernicus, in 1526, put forth the idea that putting bad money – debased coinage – into circulation drives good money – pure gold and silver coins – out of circulation. The rulers of Poland and Prussia found this convincing. Which is good because it was right.

The Reformation gave King Henry VIII in England an excuse to confiscate tons of land and money from the Catholic Church in England in the 1530s, which was a big help to Henry’s budget.

Learn by doing: try a cup of coffee
European Economy in the Early Modern period