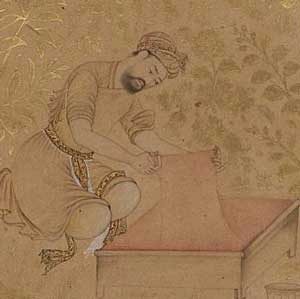 West Asia entered the 1500s AD in a very powerful position in world trade. Iran, together with the Central Asian state of Uzbekistan and the Mughal Empire, dominated the Silk Road, and the Silk Road was at the center of world trade.

Small factories with hundreds of employees – slave or free – made high-quality steel, knotted wool carpets, paper, glass dishes and silver vases, and tall cones of sugar. Divers brought up pearls from the ocean. Traders sold these things in all directions: east to Central Asia and China, south to India, west to Egypt, East Africa, and Europe. The traders brought back silk and porcelain and tea from China, fast horses from Central Asia, pepper and cinnamon and yards of printed cotton cloth from India, ivory and coffee from East Africa, and even some lumber, wine, fur and wool, amber and gold from faraway Europe. Students and scientists came from all over to study at the great universities, observatories, and libraries in Baghdad and Samarkand. The best new music came from there, too. Central Asia and Iran were the center of it all.

Carpet with Portuguese ships on it (Khorasan, late 1500s AD)

But during the 1500s AD all of that started to change. Ships arrived from Europe that had sailed all the way around Africa to the Persian Gulf and India. European traders brought heaps of silverthey had forced slaves to mine for them in South America, and traded it for cotton cloth, sugar, pepper, coffee, steel, and everything else. They brought their new stuff home with them, but they also sailed to China and all around Africa and sold it there: they sold Indian cotton cloth to West Africans, and brought pearls to China. At first the West Asian governments – the Safavids and the Ottomans – welcomed this new trade. But by the 1600s, the European ships didn’t stop in the Persian Gulf anymore. They went straight from China to India to Europe. West Asia and Central Asia began to get poorer, and the European traders got richer. 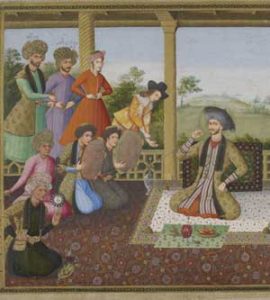 European trader at the Iranian court, 1700s AD (Notice how there are no women…)

West Asian rulers fought back. Abbas I of Iran built up the Silk Road by bringing Chinese experts to start an Iranian porcelain industry and a local silk industry, as well as encouraging carpet production and exporting paper and books. Abbas fought a battle to get the Portuguese out of the port of Hormuz. But European governments – especially Spain and Britain – used their new money to build better guns and better ships, and to train their soldiers better, and by the 1700s they ruled the oceans and wouldn’t let other traders compete with them. They used their armies and navies to colonize Africa and India, South-East Asia and Australia, as well as the Americas.

By the 1800s, Britain was telling everybody what to do, all over the world. And now Europeans bought paper and carpets and steel and glass made in France and England, cotton cloth grown by slaves in the United States, sugar grown by slaves in the Caribbean – and they forced everybody else to buy European things too. West Asians had to struggle to get by just by farming their own food and eating it – they couldn’t participate in world trade anymore. They couldn’t afford to build railroads and factories. They couldn’t sell cotton cloth or sugar as cheaply as the British could using slave labor. To keep Iran and the Ottoman Empire from competing, Britain even pressured them to free their slaves, while Britain still used slave labor to produce things! Britain started stopping and searching Iranian ships in the Persian Gulf, on the pretext that they might be carrying slaves. 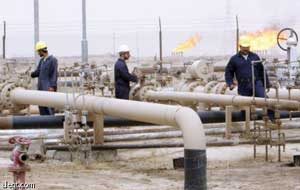 In the 1900s, though, most of the slaves were freed, and Great Britain lost most of her power after fighting World War I and World War II. Iranand Iraq began to slowly build up trade again, now mainly selling oil and gas. They used the oil and gas to build roads and factories and bridges, and they stopped farming and started to import food instead. But the United States has destroyed most of the roads in Iraq, and prevents Iran from selling its oil and gas. So West Asia is still a poor region now, even though in 1500 it was the richest part of the world.

Bibliography and further reading about the West Asian economy: