The Crow get horses – American history 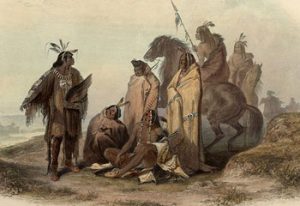 Crow people get smallpox and measles

In the 1600s AD, Crow people were still living in the Dakotas. But they caught smallpox and measles from their neighbors, the Mandan, and many Crow people died.

What was smallpox?
How do you get measles?
Early Crow history
All our American history articles

So even though they had not yet met any Europeans, Crow people’s lives were still very much changed by European settlers.

When did the Crow get horses?

Crow people met Europeans for the first time in 1743. These were French fur traders. Around 1750, the Crow traded with the Apache and Comanche to their south to get their first horses.

Native American horses
Who were the Comanche?

Why did the Crow move west?

By about 1800, white settlers pushed the Sioux and Mandan west. They forced the Crow to move still further west, out of the Dakotas into Montana and Wyoming. This is where Lewis and Clark saw the Crow in 1805.

Who were Lewis and Clark?
Who are the Mandan?

What did the Crow do on the Plains?

In Montana and Wyoming, Crow people gave up on farming (except for some small fields of tobacco). They took up hunting bison more and more. With their horses, they could kill a lot more bison. They started to live in very big tipis covered with bison hides.

What are bison?
What is pemmican?
American geography

Crow families lived mainly on bison meat, but also ate deer and mountain sheep. They cooked bison fat with berries to make pemmican. Crow men spent a lot of time also fighting small wars with their horses and bows and arrows. They fought their neighbors, the Mandan, the Sioux and the Blackfoot to their north.

When did the Crow get guns? 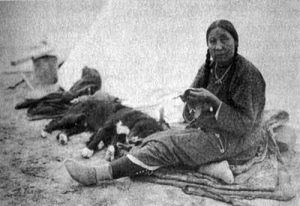 A Crow woman embroidering beads on to clothing (late 1800s)

About 1850, the Crow people first were able to buy guns, as the railroad brought white settlers to the Great Plains for the first time. But Crow people soon found themselves in an impossible position. If they sheltered their horses in river valleys in the winter, then the bison were pushed onto the cold prairie and died.

The northern Great Plains were too crowded, because white settlers had pushed too many people there: the Crow, the Blackfoot, the Cree, and the Sioux. The railroads scared the bison. And now white settlers wanted the Great Plains as well. They killed almost all the bison that were left.

When did the Crow move to reservations? 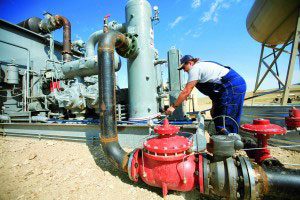 A natural gas well on the Crow reservation

The Crow tried to make friends with the white settlers. Many Crow people worked as guides and soldiers for the settlers and for the United States Army. Crow scouts helped the United States to capture Chief Joseph of the Nez Perce.

What do Crow people do today?

Today, the Crow still live in Montana, on a large reservation there. They mine coal and drill oil and gas wells for income. Many Crow people still own and use tipis when they are traveling.