What is kaolin clay? History of Art 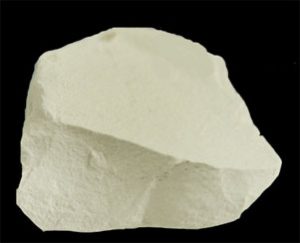 A chunk of kaolin clay

Kaolin is a kind of clay with a lot of aluminum, silica, and oxygen in it. It is the kind of clay you use to make porcelain.

What is clay?
Clay, sand, and loam
The element aluminum
What is porcelain?

Kaolin clay starts out as a kind of igneous rock called feldspar. When feldspar erodes in places that are hot and wet, like tropical rainforests, it turns into kaolin clay

People dig up kaolin clay from under the ground. They mix it with water and use it to make porcelain. Porcelain is a kind of pottery that is very white and glassy. It is so glassy that light shines right through it.

Where does porcelain come from?

Even though there is plenty of kaolin clay in North America and South America, Europe, West Asia, and India, at first, in the 500s AD, the only place where people knew how to make porcelain was China.

Everywhere else in the world people had to buy their porcelain from China, and it was very expensive. That’s why potters in the Islamic Empire invented lead glazes – so they could make white cups that looked like porcelain but were much cheaper. Today we still use white glassy glazes on most of our dishes. And we still call fancy pottery “china.” 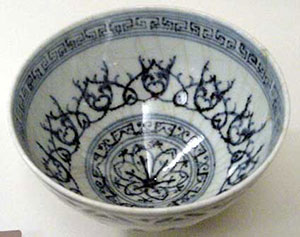 By the 1600s, Europeans were looking for ways to make and sell their own porcelain. Wasn’t there kaolin clay anywhere else? By the early 1700s, the King of Poland had gotten geologists to figure out where there was kaolin clay in Europe. He started up a porcelain factory at Meissen, in eastern Europe, soon followed by an Austro-Hungarian factory at Vienna.

Louis XV of France
Austria-Hungary in the 1700s

In the 1760s, King Louis XV of France started another porcelain factory at Sevres. These factories didn’t just sell porcelain to Europeans. They also exported hundreds of thousands of pieces of porcelain to the Ottoman Empire, the Safavid Empire, the Mughal Empire, and the growing colonies of the Americas.

Bibliography and further reading about clay and pottery: