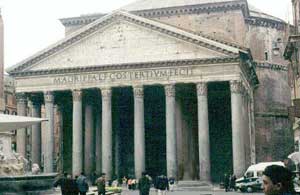 Hadrian’s Pantheon from the outside. Built in Rome, around 120 AD.

Who built the Roman Pantheon?

In the time of the Roman Emperor Augustus, about 10 BC, one of his generals, a man named Agrippa, built a temple in the middle of downtown Rome “to all the gods“. A temple to all the gods is a Pantheon, which means “all gods” (pan= all, theon=of the gods, in Greek).

Now this temple was probably very fine, but we don’t really know, because in 80 AD, in the reign of Titus, it burned down in a fire. Domitian built a new temple there, and THAT one burned down too.

The inside of the Pantheon, Rome

Around 120 AD Hadrian built a THIRD temple in the exact same place in a more modern style (modern for 120 AD anyway!). This is the temple we have today. But to honor Agrippa, Hadrian left a message over the door saying that Agrippa had built the temple, as you can see in the picture.

Who was Hadrian?
Neo-Platonist philosophy

The inside of the Pantheon’s big concrete dome.

You might think, well, that doesn’t really look like much of a place. And from the outside it really doesn’t seem very impressive. The Pantheon is built like a Greek temple on the front, with eight columns across the front like the Parthenon, and a pediment on top of that.

What’s the Parthenon?
What’s a pediment?

Inside of the Roman Pantheon: the dome!

But on the INSIDE the Pantheon is one big giant dome, the largest dome ever built in the world up to that time – 43 meters in diameter (142 feet), and 43 meters from the floor to the top of the dome.

What’s a dome?
Roman concrete
More about Hagia Sophia
And the Florence Duomo

To hold up this dome, the builders had to make the brick and concrete six meters thick – about twenty feet! The coffering in the dome lightens it a little, but it’s still very heavy. Nobody built a dome anything like this size anywhere in the world until Hagia Sophia in Constantinople in the 500s AD (but even Hagia Sophia’s dome is still smaller than the Pantheon).

The first dome that was bigger than the Pantheon was in the Duomo of Florence in the 1400s, more than a thousand years later. Even then, the Duomo dome is about the same size, and nobody ever built another one of that size, until the 1800s with reinforced concrete.

The hole in the top of the dome – the oculus– is open to the sky. Some people say the dome is so high that rain evaporates before it hits the floor, but that’s not true. Take it from me. I’ve lived in Rome in November, and on rainy days, the marble floor just gets wet.

Why didn’t the Pantheon get ruined?

The first reason the Pantheon is in such good shape is that the Roman Emperor Phocas gave the building to the Popes in 609 AD for a Christian church, and the Popes since then have taken good care of it.

Who was Phocas?
What is a Pope?
More about earthquakes

Learn by doing: try to build a round building with a dome in Lego or in Minecraft
More about Hadrian
More about domes
And more about Raphael, who’s buried here

Bibliography and further reading about the Roman Pantheon:

The Pantheon: Design, Meaning and Progeny, by William Macdonald (2002). Macdonald is a leading expert on Roman architecture. This one’s not specially for kids, but good readers could get a lot out of it anyway.