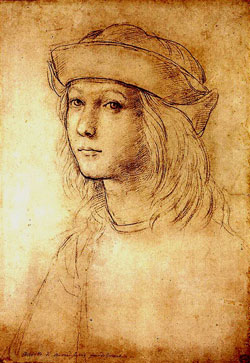 Raphael’s early selfie as a teenager

Raphael, Titian, Michelangelo, and Leonardo da Vinci were the four greatest painters of the Renaissance in Italy. Raphael was born in 1483, when Michelangelo was eight years old and Leonardo was already grown up; Titian was a little younger. With their new Chinese compasses, the first European ships were just beginning to sail south to Congo and Angola. Columbus reached the Caribbean when Raphael was nine years old.

Raphael grew up in Urbino, in northern Italy. A lot of artists lived in Urbino, incuding Raphael’s father. Raphael’s mom died when he was eight years old, and his dad died when he was twelve, so Raphael’s uncle took care of him. Europeans were getting richer by enslaving people in Peru and Brazil, Congo, Ghana, and Mozambique as Raphael grew up, and a lot of these rich Europeans wanted to buy art, so it made sense for Raphael to become a painter like his dad (Raphael’s sister Elisabetta, though, didn’t get this chance). Raphael learned from another great local painter, Perugino. 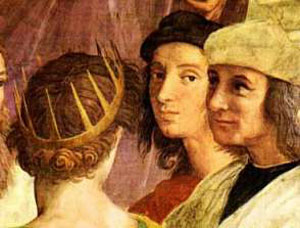 When Raphael was 18, he left Perugino to work for himself. He traveled to Siena to learn more about art, and then to Florence, where Michelangelo hated both Raphael and Perugino. Raphael painted more traditionally than Michelangelo or Leonardo, but he learned a lot from Leonardo while he was in Florence. Raphael’s paintings are more about harmony and grace and faith – they show people as they should be, like the Platonic ideal of people. The painting looks easy and natural. A lot of rich people liked Raphael’s optimistic paintings, and like his teacher Perugino, Raphael made a lot of money. Raphael got so busy that he hired a lot of assistants to paint his paintings, after he drew the outlines. 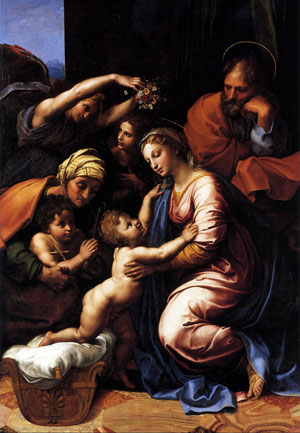 When he was 25, Raphael moved to Rome. He painted the Pope‘s private library there. Michelangelo painted the Sistine Chapel nearby at the same time, and now Michelangelo’s style influenced Raphael’s paintings. But Raphael never did the work of learning all about skeletons and muscles that Michelangelo and Leonardo did. Raphael did learn a lot from ancient Roman art. To see the paintings in Nero’s Golden House, Raphael lowered himself through a hole in the ceiling holding a candle!

Sadly, Raphael died of a fever when he was only 37 years old, just a year after Leonardo da Vinci died. Raphael asked to be buried in the Pantheon, in Rome, and you can see his grave there still today.

Learn by doing: copy one of Raphael’s paintings
More about Perugino
More about Michelangelo
And more about the Renaissance

Bibliography and further reading about Raphael: