The Inuit and Canadian history

A Canadian Inuit village in 1575 AD

In 1500 AD, the Inuit weren’t doing so well. They had been buying steel and iron weapons from Vikings and East Asian traders. They used their good weapons to hunt whales, and they lived on whale meat and built houses of whalebone.

Earlier Inuit history
Who were the Vikings?
Inuit daily life
All our Native American articles

That was still working in Alaska. But in Greenland, the Vikings had lost interest and stopped trading. Now that they couldn’t hunt whales anymore, the Inuit had a hard time getting enough food in the Arctic. Inuit in eastern Canada and Greenland were poor and struggling.

Europeans come to fish and hunt

Now in 1530 AD more Europeans arrived, but not to trade. Basque men came first, from Spain. They built little forts along the coast of Labrador to fish and hunt whales. Inuit people didn’t try to stop the Basque men, but they did raid their forts to get tools, especially iron tools, for themselves.

Then Martin Frobisher and John Davis came from Britain in the 1570s and 1580s. They sailed around the Arctic looking for what they called the “Northwest passage”. They were trying to find a way to sail from Greenland to Alaska by boat. Then Europeans could ship things from Europe to China without having to travel all the way around Africa and India.

Inuit people met with these British visitors. They told the men they didn’t know any Northwest Passage (because there isn’t one). Frobisher took one Inuk man back to England with him, just to visit. 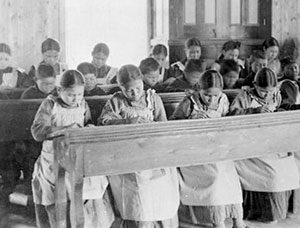 What was smallpox?
And measles?
History of tuberculosis
What is dysentery?

On the other side of the Americas, in Alaska, Inuit people were still trading with people in Siberia, selling furs and buying metal tools and buckles.

Russia and the Inuit

Gradually more European and Central Asian people came to visit Inuit villages. Some of them stayed to show that the Russians or the Canadians or the United States government ruled the Arctic. In 1766, Catherine the Great sent Russian explorers and settlers to Alaska. She claimed Alaska as part of Russia. Europeans didn’t like that!

Who was Catherine the Great?
Colonization timeline

So in the late 1700s,  Protestant missionaries from Europe came and converted many Inuit people to Protestant Christianity. These missionaries also gave people lots of iron tools like sewing needles and knives that were very useful to them.

Russia, the United States, and Britain competed for control of Inuit land. So more and more explorers came to Alaska and northern Canada. Finally in 1867, the Russian Czar Alexander sold Alaska to the United States (as if it were really his and didn’t belong to the Inuit!). 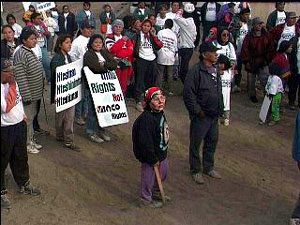 About 1940, Canadian people developed good enough airplanes and helicopters to be able to visit Inuit territory even in the wintertime. Now the Canadians interfered more with the lives of Inuit people. Canadians forced Inuit kids to go away to terrible boarding schools, saying they would learn Canadian ways of doing things. They forced grown-up Inuits to settle down in towns instead of being nomads.

At the same time, Canadian doctors and nurses saved many Inuit babies and children who would have died. So there got to be many more people living in Inuit territory than there had been before. There were too many to feed by traditional hunting and gathering and fishing. Many Inuit became poor and angry.

But in the 1960s kids in the boarding schools made friends with each other. They decided to fight for better treatment for their people. When they grew up, they went back to their families and insisted that Inuit people should be treated by Inuit doctors and nurses, and have Inuit policemen and government in their towns.

Other Native people in Canada: the Blackfoot