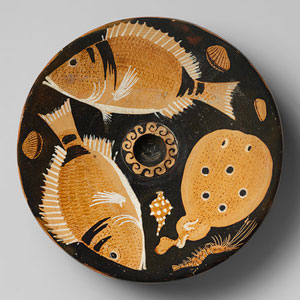 Food, for people in Ancient Greece, was what separated people from animals, and from the gods. Gods didn’t need to eat, and people did. Animals ate their food raw, but people cooked their food and were civilized. 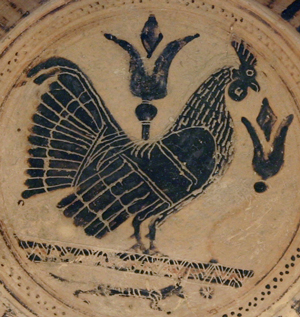 Corinthian painting of a rooster

Where does wine come from?
Wine-making and wine presses
Dionysos, the god of wine
Who was Persephone?

Bread and wine, with olive oil, and fish and shellfish, made up most of what people ate in Ancient Greece. They liked cheese when they could get it.

What is olive oil?
History of fishing
How do you make cheese?

Did ancient Greek food include vegetables? 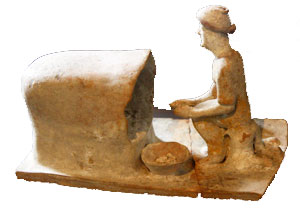 Where are lentils from?
How about chickpeas?
Who domesticated apples?
More about almonds

They also ate cabbage, parsnips and onions, garlic and leeks. They ate apples, figs, and almonds.

Greek people probably didn’t have chickens, or chicken eggs, until around 500 BC – so when Socrates says to sacrifice a rooster to Asclepius, he’s thinking of something new and cool. Greek people started to import black pepper from India about the same time.

Most people only had meat on holidays. But people still liked cakes with honey, and yogurt with honey and walnuts in it, for dessert. They also ate a lot of figs, apples, and pears, both fresh and dried.

Honey and beehives
How do you make yogurt?
History of figs

Did you find out what you needed about ancient Greek food? Let us know in the comments!

Bibliography and further reading about food in ancient Greece:

Spend the Day in Ancient Greece : Projects and Activities that Bring the Past to Life, by Linda Honan (1998). Also for kids, with recipes for a Greek feast.