If you’re a teacher, parent, or day camp counselor thinking of spending a week or so on the Greeks, here’s some ideas for ancient Greece activities other people have found useful.

To dress as a Greek boy, an extra-large white T-shirt with a belt will look fine. It should reach their knees. Bare feet or sandals are good, and a cloak can be any largish piece of solid-color cloth – it should also reach their knees, and can be knotted on the shoulder or pinned with a brooch.

More on Greek clothes
All our ancient Greece articles

To dress as a Greek girl, a long white nightgown is a good place to start. It should reach their ankles. Then on top of that, take a white or solid-colored sheet. Hold it up against them so the long sides are parallel to the ground.

Fold it over so that the dress reaches from their neck to the ground, with the fold on the side away from their body. Now fold the sheet in half, with the child in the middle, so they have half of the sheet behind them and half in front of them, and it goes under their left arm. 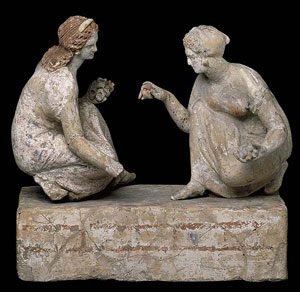 Pull up on the front and back over each shoulder, and pin the cloth over their shoulders. Now the dress is done except it is open all down the right side. Add a sash to hold the right side closed.

Greek girls also wore bare feet or sandals and had cloaks like the boys, only sometimes the girls wore their cloaks over their heads or even their faces, like veils.

Pita-bread pizzas with olive oil, feta cheese, mushrooms and/or onions (no tomatoes!), or artichokes are appropriate; so is lentil soup, or barley soup. You could have a green salad with it, with lettuce, spinach, onions, and cucumbers, and oil and vinegar dressing; for dessert honey on bread, or yogurt with honey and walnuts, or baklava. 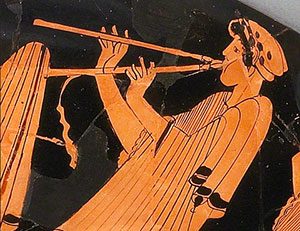 Pipes and stringed instruments and drums are all okay. A recorder, a small harp, and a tom-tom drum would be good. We don’t really know what Greek music sounded like, so you can play whatever you like.