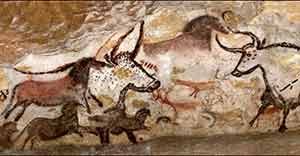 Climate change encouraged the evolution of the first humans, who probably evolved in Africa as the climate got drier and grasslands replaced jungles.

People came down from the trees and evolved to swim and fish. They learned to walk upright and run to catch gazelles and wildebeest in those new grasslands. For most of human history, all the humans of the world lived in that environment.

Moving out of Africa

But about 100,000 years ago, the first modern humans began to migrate across the Sahara (which was not then a desert) into new continents. Along the coast of South Asia, in India, these explorers found tropical forests and fishing opportunities.

Early clothing
What is an aurochs?
What are bison?
The Quaternary period

But other groups ventured further north, and found the wide grasslands of Central Asia and the Great Plains with their horses and aurochs and bison. The grasslands would have been familiar, but the newcomers had to learn to adapt to cold, snowy winters. There was an Ice Age. People learned to build houses and make warm coats and shoes.

The Ice Age tied up so much sea water as ice that the Bering Land Bridge was uncovered, and Paleo-Indians crossed from Asia to the Americas. A warming period about 10,000 BC may have dried out the Sahara Desert and made it harder to cross, isolating southern Africa. 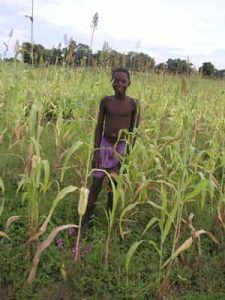 A boy in a millet field in Burkina Faso (West Africa)

By about 10,000 BC, the Ice Age was over. Now people were beginning to have a big effect on the environment themselves. First, they hunted many of the large herd animals to extinction.

Where are horses from?
History of camels
North American environment

In North America, horses, camels, mastodons, and many other animals died out. In Central Asia and Europe, the animals that died included mammoths, elephants, bears, and lions. People had to hunt smaller animals – deer, rabbits, and birds. They started to use bows and arrows instead of spears.

Second, people began to cut down more and more forests in order to turn the land into artificial grassland – farmed fields of wheat and barley and millet and rice – which released a lot of carbon dioxide into the air and caused some global warming. Other farming practices also affected the environment: ancient Nubian irrigation, for example, made more people suffer from schistosomiasis.

Around 1000 BC, Asian, European, and African people began to use a lot of iron, and again they cut down a lot of trees to burn as fuel for blacksmiths smelting iron. This, too, caused some global warming. Deforestation took longer to reach northern Europe and North America, but it has now reached almost everywhere on Earth, while the use of fossil fuels like oil and gas is making the climate warm up much faster than ever before.

Another warming period about 1000 BC ended the Bronze Age, and caused a brief Dark Age. It’s possible that a colder period about 500-700 AD had something to do with the collapse of the Roman Empire and the Sassanian Empire, and maybe the rise of Islam.

The fall of Rome
The Sassanians
Mohammed and Islam

Around 800 AD, the Medieval Warming Period brought settlers and wealth to northern Europe and funded the great cathedrals. It may have convinced the Iroquois to move north, and wrecked the Pueblo culture in the American Southwest.

Then the Little Ice Age, from about 1200-1850 AD, caused famine and frozen winters in China and Europe, while it encouraged the Navajo and the Apache to move south from Canada, and may have helped the Mongols conquer their empire.

Learn by doing: Visit grasslands and forests. Where do you feel more comfortable? Why?
More about climate change

Bibliography and further reading on the ancient environment:

Human Impact on Ancient Environments, by Charles L. Redman (1999). Redman argues that people have been destroying the environment since the time of the Sumerians.

Floods, Famines, and Emperors, by Brian Fagan (2000). Fagan argues the reverse: the enviroment has been destroying people. He thinks El Nino is responsible for a lot of political change all over the world. Other people are more skeptical, but he’s probably right about some of it at least.

The Long Summer: How Climate Changed Civilization, by Brian Fagan (2003). More of the same kind of thing, blaming a lot of problems on the long global warming trend that has been going on since about 8000 BC. Be careful – it’s poorly edited and there are some errors.