Where do apples come from? – History of apples 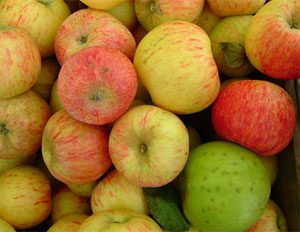 The history of apples starts in Central Asia

Where do apples come from?

Apple trees grew wild in Central Asia and western China beginning – as new DNA studies show – about ten to twenty million years ago, around the time that the first humans were evolving.

That was the Tertiary Period. Apples are related to roses, berries, peaches, almonds, and many other fruiting plants.

What else was going on in the Tertiary?
Where do almonds come from?
Find out more about peaches 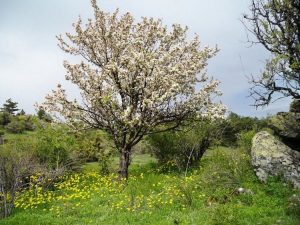 History of apples: this is the wild apple tree – Malus Sieversii – that is the ancestor of our apples.

When did apples get so good to eat?

Early apples were small and sour – more like crabapples. Birds ate their seeds. But then mammals like deer, pigs, and bears moved into Central Asia, about seven million years ago.

Some kinds of apples – – Malus sieversii – evolved to take advantage of this new way to spread their seeds. To get animals to eat them, these apples became bigger and sweeter. Apples evolved to have tear-drop shaped seeds that would pass right through the animal’s digestion.

Horses, which also lived on the steppes of Central Asia, were eating apples about five million years ago.

When Homo Erectus arrived in Central Asia about a million years ago, they probably began to eat apples right away. That was in the Quaternary period.

What else was going on in the Quaternary?
More about early humans

Modern humans ate apples too, when they got to Central Asia, about 50,000 BC. By about 6,500 BC, people were carrying apple seeds west to West Asia and east to China, planting apple trees, and eating apples there too.

The Bible in English has Adam and Eve eating an apple, but actually in Hebrew it just says that they ate a fruit, and not what kind; the apple comes from a Latin translation.

What’s the story of Adam and Eve? 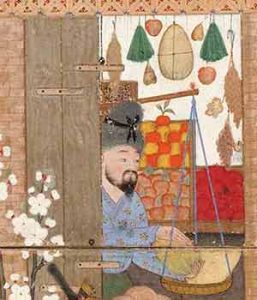 Shop with apples and other fruit on display. Mir Sayyid ‘Ali,”Nighttime in a Palace,” detail, Safavid or Mughal, ca. 1570 AD (now at Harvard)

Still, apples were among the first plants that people planted on purpose. By 2000 BC, people were eating apples in Greece and Italy, and by 1300 BC there were a few apple trees in Egypt.

Before the Romans came to England there were already apples there, too. People mostly don’t grow apples in Africa or south India, because it’s too close to the equator for apples to grow well. Apples need cold nights to ripen well. 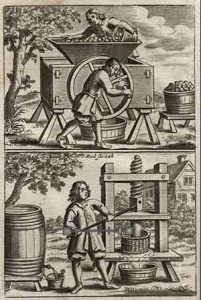 For ancient and medieval people, the best thing about apples was that they came ripe just as it was getting cold and they would keep all winter, so you could have food even when nothing was growing.

People sliced apples and dried them in the sun to make dried apples, and they stored them in underground cold bins just as whole apples, but mostly they pressed the apples with wooden presses to make cider.

What people ate in Northern Europe
How does yeast fermentation work?

When the Spanish, and then the English, came to North America, they both brought apples with them in the 1600s AD, to make apple cider. All along the East Coast and in the Pacific Northwest, apple cider was again many people’s main drink until Prohibition put the cider orchards out of business in the 1920s.

Did you find out what you wanted to know about the history of apples? Let us know in the comments!

Bibliography and further reading about apples:

Food in Antiquity: A Survey of the Diet of Early Peoples, by Don and Patricia Brothwell (1998). Pretty specialized, but the book tells you where foods came from, and how they got to other places, and what people ate in antiquity. Not just Europe, either!
Food: A Culinary History from Antiquity to the Present, by Jean Louis Flandrin, Massimo Montanari, Albert Sonnenfeld. (1996). Hard going because it is translated from French, but Flandrin was one of the world’s great food historians.

An up-to-date article about apple history from National Geographic