What’s the equator? Geography and the Earth 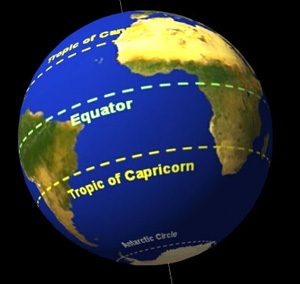 This globe shows the equator running around the widest part of the Earth.

Where is the equator?

The equator is an imaginary line running around the widest part of the Earth, halfway between the North Pole and the South Pole. You can’t see it.

Why does Earth have weather?
Plate tectonics and continents
What causes the seasons?
All our geology articles

What are the hemispheres?

What is a sphere?

Why is it hotter there?

In both hemispheres, it is hottest near the equator. That’s because the sun’s rays strike that part of the Earth more directly. They don’t have to go through as much of the atmosphere before they hit the earth. It gets cooler the farther north or south you go, until it is very cold at both the North Pole and the South Pole. With the climate crisis we are having now, the part of the earth that are close to the equator may soon get too hot for anyone to be able to live there.

More about the climate crisis

What countries does the equator go through?

On Earth, most of the equator is in the Pacific Ocean or the Atlantic Ocean. But the line also runs through Congo, Kenya, Somalia, Indonesia, Ecuador, and Brazil (and some other countries too).

Days and nights at the equator

At the equator, days and nights are both 12 hours long – the same length – all year round. The further away from the equator you get, the more the days get longer in the summer and shorter in the winter. At the North and South poles, it’s daylight all summer and night all winter.

Magnetism and the poles

Do other planets have equators?

Other planets like Mars and Jupiter also have equators, which also run around their widest part. Generally speaking, the equator is the hottest part of a planet, and the north and south poles are the coldest. But that isn’t always true.

Bibliography and further reading about the Earth: