What is Mardi Gras? Christian holidays 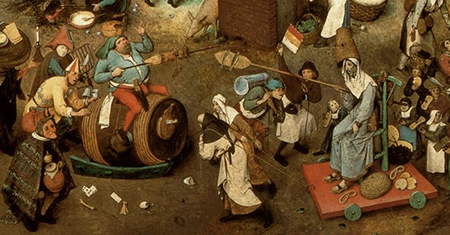 Pieter Brueghel, Carnival (Mardi Gras) on the left and Lent on the right

First there was Lent

What is Lent?
What is Easter?
Christianity at this time
History of Christianity
Roman religion
All our ancient Rome articles

Lent and the Lupercalia

There was a big Roman festival that happened in the middle of February, the Lupercalia. Of course if you became a Christian you couldn’t celebrate the Lupercalia anymore, but people missed it. “Stop celebrating Lupercalia!” people whined. “But we like Lupercalia! It comes in mid-winter when we are all cold and cranky and bored and it cheers us up!”

What’s the Lupercalia?
Where does beer come from?
History of eggs
And the history of cheese 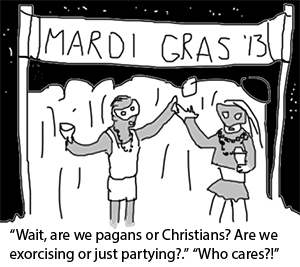 Then it occurred to people that it still might be cool to have a big party the night before Lent started, to eat all the things you wouldn’t be eating during Lent, like meat and beer, eggs and cheese. The night before Ash Wednesday is always a Tuesday, so people called this party “Fat Tuesday”. You were eating fatty things and getting fat. In French Fat Tuesday is “Mardi Gras”, which is what we usually call this party today. Or people call it “Carnival”, which comes from the Latin “carnem levare” – carry away the meat.

A different take on Mardi Gras

Another way to look at it is to say that people have always had this problem of making their food last through the winter. You harvest it in the fall. You are so happy, looking at these big piles of food. Wow, there is for sure definitely enough here to last until spring! No problem! You have a big party (say, Diwali, Saturnalia, Hanukkah, or Christmas)! You have another one (say, New Years)! Then you get to the beginning of February and… whoa, where did all the food go?

History of Christmas
What is Nowruz?
And the Qingming Jie Festival?

There’s, like, hardly any left! And still two months until spring! You decide to eat all the rest of the good food in one big blowout, what the heck. (That’s Lupercal, or Purim, or Mardi Gras), and then go on a strict diet (that’s Lent) until the first spring food comes ripe (that’s the Babylonian New Year, Passover, Nowruz, the Qingming Jie Festival, or Easter). Next year, for sure, you’ll be more careful… (no, you won’t.)