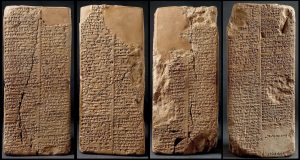 Clay tablets with cuneiform writing of the Enuma Elish

By about the time of Hammurabi, about 1700 BC, people in the Babylonian Empire were beginning to write down this story about the creation of the world.

The name, Enuma Elish, comes from the first two words of the poem, which mean “when on high”. This is a Babylonian story, which also explains how the Babylonian gods came to rule over earlier Sumerian gods like Enlil. Probably this is just how the Babylonians told it; the Sumerians had a different version.

Who was the god Enlil?
Who were the Sumerians?

The Earth and the Sky get together

The Enuma Elish (eh-NOO-mah eh-LISH) begins when the earth and sky don’t have names yet (think of the beginning of the Christian gospel of John – “in the beginning was the Word”). Apsu, the first god-father, and Tiamat, the first god-mother, who is also chaos, mix their waters together to create a second generation of gods, Ea and his brothers. But these young gods make so much noise playing that Apsu wants to kill them. Tiamat warns her son Ea of the danger, and Ea kills Apsu instead. So Ea becomes the new chief god.

What causes wind really?
What are tornadoes?

Marduk becomes the ruler of the gods

Younger gods, still inside Tiamat’s body, convince Tiamat to take revenge for Ea killing her husband Apsu. Tiamat, with her new husband Kingu, creates monsters (like the Greek Titans) to help her and a great war starts, but in the end Tiamat loses.

Marduk becomes the new king of the gods, over older gods like Enlil. Marduk rips Tiamat’s body into two halves, and one becomes the sky while the other half is the earth. Out of Kingu’s blood, Marduk makes the first men.

Babylonian people told this story every year at their great festival of the New Year, in springtime, when the world started out new. We still celebrate big holidays in early spring that are descended from this Babylonian New Year: Passover, Nowruz, and Easter.

Compare this story to the Jewish and Greek and Indian stories of the Creation.