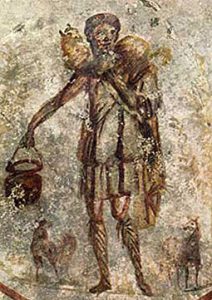 History of Christianity: One of the earliest images of Jesus, from St. Callisto catacomb in Rome (ca. 250 AD)

Around the time of the beginning of the Roman Empire, a new religion began among the Jews living in Israel: Christianity.

People seem to have felt that these new governments – these big empires – needed bigger, more organized religions to stand up to them. This movement may have started further east with Zoroastrianism and Buddhism, and then spread west to start Christianity.

What is Zoroastrianism?
Where did Buddhism start?

Like Buddhism and Zoroastrianism, Christianity also tapped into a lot of ideas that people were starting to think about more at this time, like the idea of the afterlife, the separation of church and state, and the separation of the soul from the body.

Like these other faiths, Christianity quickly spread all over the Roman Empire. Christianity also spread eastward into the Parthian Empire and to the Goths and other Germanic people.

Many of the first Christians, like the first Buddhists, were radical young men and women. Many of them were from rich families. To them, Christianity meant sharing their money and food with each other, and with poor people.

Some early Christians thought it meant equality between men and women. Women refused to marry or have children because they were devoting themselves to God, and young people turned away from their families. Many Romans and many Parthians hated the Christians. Thousands of Christians were jailed, and a few hundred Christians were killed.

Manichaeans and the Sassanians

But starting around 250 AD, older, more conservative men like Cyprian took control of Christianity. They changed Christianity so you could lead a normal, Roman life and also be a Christian (and they separated the men from the women). You didn’t have to believe in communal property or equality anymore.

Like the Buddhists, they started to organize monasteries for men and convents for women. By 312 AD, there was a Christian Roman Emperor, and a hundred years after that it was illegal NOT to be a Christian in the Roman Empire (with some exceptions for Jewish people). Monasteries became tightly regulated places, where thousands of monks worked making wine or cloth or books, teaching children, or providing child care, nursing, or elder care.