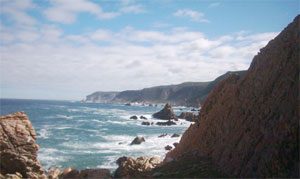 Two and a half billion years ago, the Archaean Eon ended and the Proterozoic Eon began. Trillions of prokaryote cells lived in Earth’s oceans. Some of these cells could photosynthesize their energy from sunlight, water, and carbon dioxide.

These photosynthesizing cells pooped out a lot of oxygen. By about 2.3 billion years ago, the iron and sulphur rocks of Earth had soaked up all the oxygen they could use. More and more left-over oxygen was floating around in Earth’s atmosphere.

By two billion years ago, a few cells had evolved that could use all this oxygen in the atmosphere to get energy. Eukaryote cells didn’t evolve to be able to use oxygen or photosynthesize themselves. Instead, eukaryotes captured the smaller cells that could photosynthesize and worked with them. Gradually these smaller cells lost the ability to live independently and turned into mitochondria and chloroplasts. The eukaryotes got more and more complicated. They also evolved to be able to reproduce through meiosis, with both a father and a mother, instead of only by cell division (mitosis).

A billion years later, one billion years ago, plate tectonics brought the continents together into one big supercontinent we call Rodinia. Then Rodinia broke apart, so that the pieces soon began to float away from each other again. During this time, also, there were several Ice Ages, when all of Earth was much cooler than it is today. A lot of the water in the oceans turned to ice. Possibly for a while about 700 million years ago the whole Earth may have been one big ball of ice. But then it soon melted again. 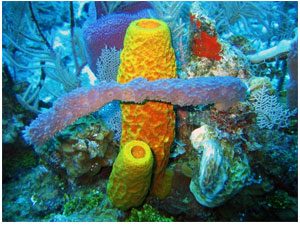 Meiosis, or sexual reproduction, gave cells a lot more diversity in their DNA. The diversity let evolution happen more quickly. So only a little more than a billion years after meiosis began, the first creatures developed that had more than one cell – they were something like hydras. That was about 600 million years ago.

Around the same time, the first divisions between animals, plants, and funguses (like mushrooms) happened. Soon there were sponges and jellyfish and flatworms in addition to hydras, and the first multi-cellular plants like seaweed, as well.

The end of the Proterozoic, about 542 million years ago, is roughly the time when the first segmented worms and arthropods – insects like beetles – appear on Earth. The next period is the Cambrian Era.

Learn by doing: Sponges
Go on to the Cambrian era