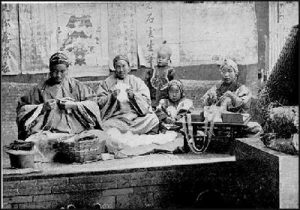 Inside Chinese houses: Women sitting on a k’ang bed in the 1890s

Beginning in the Stone Age, people in China heated their beds before they slept in them. At first people just made a fire on the clay floor to warm it. Then they swept the ashes away before putting blankets down on the warm floor. By about 100 BC, though, under the Han Dynasty, many houses had a raised brick bed platform called a k’ang.

When was the Han Dynasty?
More about Chinese houses
All our China articles

What was a K’ang?

A k’ang had a stove built in underneath, so you could keep the fire going and sit on top on the warm bed. This platform was the main piece of furniture in most houses. Many women and old people spent most of their day sitting on the warm k’ang. Starting around 300 AD, during the Three Kingdoms period, builders invented more complicated pipes under the k’ang so that it worked more efficiently.

More about the Three Kingdoms
Furniture in ancient Egypt

Other furniture inside Chinese houses

Besides the k’ang, most houses had a wooden table and some wooden stools. They had a water barrel and a grindstone to grind wheat or barley. Depending on how rich you were, you might have very few blankets and curtains and pillows in your house, or you might have a lot of them. You might have wooden chests or straw baskets to hold extra blankets and clothing, but cloth was so expensive that most people didn’t have any extra clothing.

What did people make out of straw?
History of baskets
What’s a grindstone for?

Beginning in the Han Dynasty, as paper became very popular in China, people used paper to make translucent windows. You couldn’t see through the paper as you can with glass windows, but paper was much cheaper than glass. In any case nobody really made glass in China.

The invention of paper
Who invented glass windows?