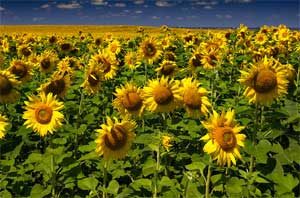 Probably the greatest contribution of Native American people to science before 1500 AD was the domestication of several plants, especially sunflowers in eastern North America. These plants were very useful to them. And now they are useful to the people of the whole world.

What are sunflowers?
Where does olive oil come from?
How about avocados?
Soybeans: another oil source
And peanuts
All our Native American articles

Farmers had to work on this for many hundreds of years. They worked with the wild plants that grew near them. They encouraged those plants to evolve into forms that would be useful to people. So Native American science gave us sunflower oil, which is an important kind of cooking oil today.

Native doctors could be men or women. They worked hard to develop medicines to take care of people who got sick. Different tribes used different plants, depending on their environment. For example, people chewed milkweed roots to cure lung diseases like bronchitis. Native American doctors made tea from boneset leaves to treat fevers and colds. They mixed pokeweed roots with fat to cure skin diseases.

And they made a tea from pokeweed berries to treat arthritis and rheumatism. They used jewelweed to cure cases of poison ivy. Most of these medicines didn’t work, but neither did European, Asian, South American, or African medicines from the same time.

What is charcoal?
History of medicine

One Native American medicine that did work was powdered charcoal.  Doctors mixed charcoal with water and gave it to cure stomachaches, most often probably caused by food poisoning. (Doctors used charcoal that way all over Eurasia too.) 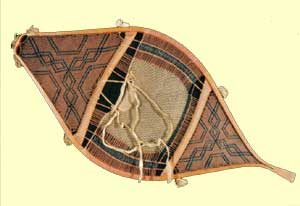 Probably the earliest snowshoes were invented in Central Asia, about 3000 BC. Then people in North America learned about snowshoes through the Tuniit or Inuit in Alaska and Canada. But soon people were using snowshoes all over the snowy parts of North America.

Who were the Tuniit?
And the Inuit?
And the Cree?
Where did the Iroquois live?
Central Asian science

Each group developed their own different kinds of snowshoes. As you go further south, where the snow was warmer and wetter, people made their snowshoes longer and narrower. Cree snowshoes were nearly six feet long, almost like skis! Iroquois snowshoes are narrower and shorter so that they could walk in forests where the trees were close together.

Did you find out what you wanted to know about early Native American science? Let us know in the comments!

Learn by doing: go for a walk on snowshoes
More about Native American farming