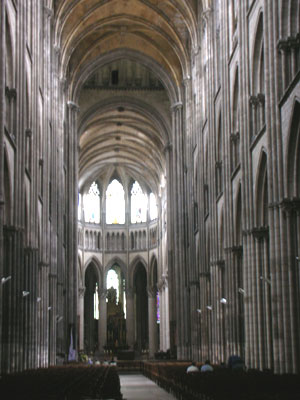 In the late 1100s and early 1200s AD, the kings of France, Philip and his son Louis, whose capital was Paris in the north, managed to conquer the south of France and make it part of their kingdom.

Now all the tax money that had been used to build Christian churches and castles in the south of France came to Paris instead, and finally the people of northern France could afford to build big stone buildings. They didn’t waste any time!

Philip Augustus to Blanche of Castile

A Gothic cathedral – a new style

In the south, people had been building churches in the Romanesque style, but for these new churches, the architects wanted a new style, which we call Gothic. The easiest difference to see between the two styles is that while Romanesque churches have round arches, Gothic churches have pointed arches.

But there are a lot of other differences as well. Gothic cathedrals have many more windows, and much bigger windows, and so they are not dark like Romanesque churches.

In the hot south, people liked thick walls and small windows, so the churches would be shady and cool. In the north, where the days were darker and shorter, people wanted more light. So the architects figured out new ways of making roofs and of supporting walls, especially the groin vault and the flying buttress.

Did you find out what you wanted to know about Gothic cathedrals? Let us know in the comments!

Check out some Gothic cathedrals:

Learn by doing: visit a big church near your house.
The church at Laon