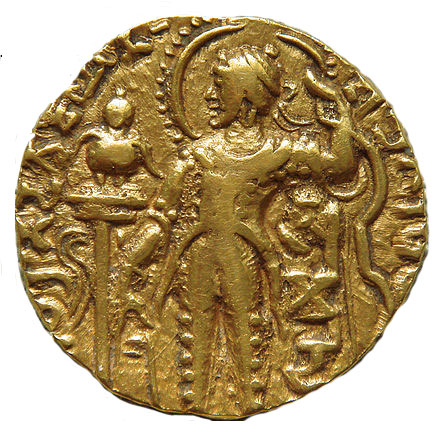 People called Chandragupta the “King of Kings”. That was what they called the Iranian emperors further north.

Chandragupta was not Buddhist but Hindu. He followed the older Indian religion. But he let other people worship however they wanted. That was different from Rome at this time. Many Jains moved from eastern India to western India, across the Guptan Empire, at this time.

Hinduism in India
Who are the Jains?

Chandragupta died about 335 AD. His son Samudragupta conquered even more of India. He even conquered part of  Southeast Asia and Central Asia. Every year, Samudragupta led his troops out to conquer more land. He may have forced the rich Sogdians to pay taxes to India. (They lived in what is now Afghanistan, north of India.) Like the Roman emperor Constantine a few years earlier, Samudragupta minted beautiful solid gold coins.

Who were the Sogdians?
History of Burma

India’s economy under the Guptan Empire

Under the Guptan kings, India was very rich and powerful. Peace allowed traders to travel safely. Every year, there was more trade between India and China. A lot of the trade went by boat around India to Indonesia and from there to China. Other traders took caravans of camels north through Sogdiana in Central Asia. Traders also went west across the Indian Ocean to East Africa.

This travel may have helped Indian mathematicians to make important advances in math at this time, like the number zero. Indian people also invented many other things under the Guptan Empire. Mathematicians invented the game of parcheesi. Indian scientists figured out how to make sugar cane into pure crystalized sugar about 350 AD. So Indian traders started to sell sugar in China. In return, Chinese travelers brought an early version of the game of chess to India. 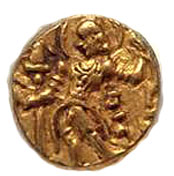 When Samudragupta died about 380 AD, his son Chandragupta II took over. He was even more successful than his father and grandfather. India became very rich. There were good roads, hospitals for sick people, and universities.

Indian doctors and medicine
Science and math in India

Guptan kings liked to use marriages to rulers in other kingdoms as a way to get more power too. Chandragupta II’s daughter Prabhavati married a neighboring Indian king, Rudra Sena II. When Rudra Sena died, Prabhabati ruled as regent for their sons. 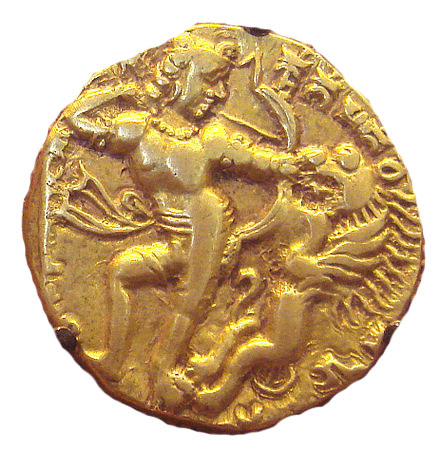 Coin of Kumaragupta shooting a lion

Chandragupta II died about 415 AD. His son Kumaragupta kept the empire going. But in 455 AD the Huns invaded India from the north. They destroyed the Guptan Empire.

Kumaragupta may have been killed. India slowly split into a bunch of smaller kingdoms. Two of these new kingdoms were the Chola Empire and the Rajput kings.

Bibliography and further reading about the Guptan Empire: