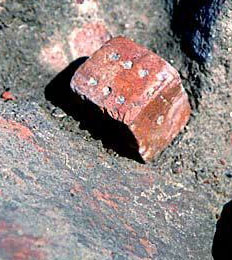 Indian games: A die found in excavations at a Harappan period site. Note that the six is not opposite the one.

The first games in India

People brought the idea of throwing the knucklebones of sheep or pigs to tell the future, or to play a game of skill like jacks, when they first came from Africa to India about 40,000 BC.

The invention of dice

But people in India may have been among the first to get the idea of carving those knucklebones and turning them into marked dice.

History of dice
When was backgammon invented?

The earliest known dice in the world come from a backgammon set from Iran, from about 3000 BC. Harappan people certainly used dice about 2500 BC, and the Rig Veda and the Mahabharata – Indian books – both tell stories about dice.

Certainly Indian people invented a lot of board games, and they liked to play them. By the 300s AD, in the Guptan Empire, people in India were playing Pachisi (we know it as Parcheesi). They made the boards out of cotton cloth, and threw six cowrie shells to determine the moves. They made the pieces out of wood.

About 600 AD, under people in India began to play chess. They may have gotten the idea partly from China, where versions of chess were a variation on earlier games of Go.

Chess soon spread from India to the Islamic Empire and from there to Europe. Playing cards reached India from China around 900 AD; many people in India changed the rectangular cards for circular ones.

Playing chess: a project
Where are playing cards from? 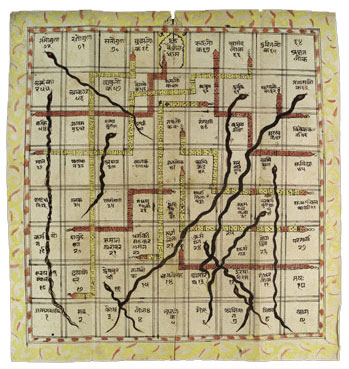 Sometime around the 1200s AD (or possibly earlier), people in India also began playing a game they called Snakes and Ladders (we know it as Chutes and Ladders).

Hounds and Jackals
Hinduism in India
What is Nirvana?

It might come from a much earlier African game, Hounds and Jackals. But this was a Hindu game. Each space was called a house, and each house represented a kind of emotion.

You threw dice to see how far you should go, and used a cowrie shell for your piece. The ladders stood for good feelings, while the snakes stood for bad feelings that took you farther away from Nirvana.

People in India also played the game of mancala, which also probably started as an African game.

What about athletic games?

Where do camels come from?
Central Asian wrestling

Learn by doing: play a game of chess, Parcheesi or Chutes and Ladders
More about dice
History of board games
More about Ancient India