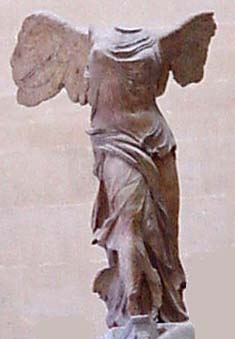 What happened to all the Greek statues?

What is cement?
What is marble?
More about Greek art
All our ancient Greece articles

In the Middle Ages, both Christians and Muslims hated Greek statues, which they associated with Greek gods. So medieval masons burned Greek statues in lime kilns to make cement. Practically all big Greek archaeological sites have medieval lime kilns in the middle of them.

What about Roman copies?

Art historians divide Greek sculpture into seven main periods, though we are not always sure which period a statue belongs in.

Living in Europe, but near West Asia and Egypt, Greek sculptors learned from all their neighbors. The earliest Greek sculpture comes from the Stone Age, about 6000 BC. It’s mostly clay and stone figurines of men and women, like figurines made by other European people.

In the Bronze Age, about 1500 BC, the Greeks made small statues of bronze or gold, and statues of women wear clothes, like the ones from West Asia.

Starting in the Archaic period, about 700 BC, Greek sculptors learned from Egyptian artists how to carve stone statues that would stand on their own, and they began to use the lost-wax method to cast hollow bronze statues. In Italy, the Etruscans made very similar statues.

But by the Severe and Classical periods, about 500 BC, Greek artists were influencing their neighbors as they worked to master realistic representations of muscles and bones, and varied poses – running, bending over, twisting around.

Finally in the Hellenistic, about 400 BC, Greek artists began to work with marginalized and mythical characters; they carved children, old people, poor people, foreigners, centaurs and satyrs. Also, they began to carve some women without their clothes. These statues influenced artists even very far away, in East Africa, India, and China.

Learn by doing: pick a Greek statue you like and try to copy it in clay
More about Classical Greek Sculpture