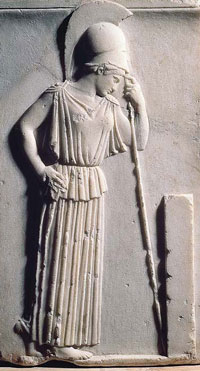 But just as in the Archaic period, all Greek Severe Style sculptors carved women with their clothes on. Women also did much less moving around, and had a much smaller range of emotional expressions, than the men did. As if to emphasize their inability to move around, most of the Severe Style sculptures of women are either seated or carved in relief, stuck to the stone behind them. 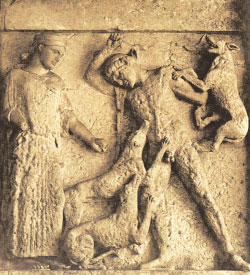 Zeus throws his spear, but Athena only leans on hers. And while Actaeon fights with the dogs attacking him, naked, and with his arms and legs all in motion, Artemis (who’s supposed to have just been surprised in the bath) is fully dressed and motionless.

From the Severe Style, which people also call Early Classical, sculptors moved on to the true Classical style.

Learn by doing: make a clay statue of a woman doing something
More about Classical sculpture

The severe style in Greek sculpture, by Brunilde Ridgway (1970). By an expert, for specialists.