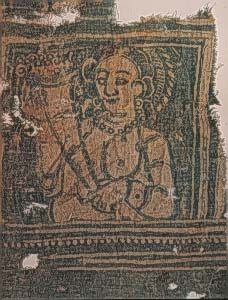 When was the Han Dynasty? 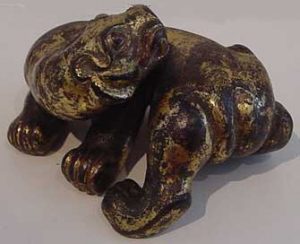 The first big change, about 200 BC, was the invention of good steel. Most of this steel came from the Mauryan Empire, in India. Chinese blacksmiths made sharp, strong sewing needles out of the steel. Artists used the needles for embroidery. So embroidery became a lot more popular. Soon this sort of embroidery spread west along the Silk Road to West Asia and into Africa too.

The next big change was that many people in China converted to a new religion, Buddhism. Buddhism got started in India, and the Indian religious men who told Chinese people about Buddhism also showed Chinese artists Buddhist art.

What is Buddhism?
Buddhism in China
Indian art

Many Chinese artists began to draw pictures of the Buddha and his holy followers, the boddhisatvas, and carve sculptures of them. The style of these Buddhist paintings and sculptures was a lot like Indian art styles.

The other big change was that Chinese scientists invented paper. Instead of painting on silk the way they had in the Zhou and Qin Dynasties, Chinese artists started about this time to use paper (but they still used silk too).

Invention of paper
Where does silk come from?

Most of the time, Han painters didn’t use colors in their paintings. They did line drawings instead. They used thick and thin lines to show what was closer and what was farther away.

On the other hand, by the end of the Han Dynasty the old sacrificial bronzes that began in the Shang Dynasty seem to have been losing popularity – artists kept making them, but in the same old shapes, without any new experiments or new ideas.

Han Dynasty artists did make a lot of very lively small clay figures, both people and animals. Some were sculptures, and some were reliefs molded on to the new clay bricks.

What is clay?
Han Dynasty architecture

Did you find out what you wanted to know about Han art? Let us know in the comments.

Learn by doing: make a small figure out of clay
Go on to Three Kingdoms period art