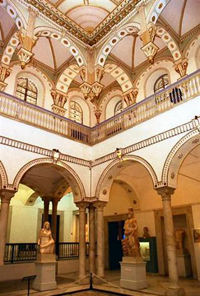 In Tunis, Ibn Khaldun went to the best schools. He memorized the entire Quran and studied the works of ibn Rushd (Averroes), al Ghazali, and ibn Sina (Avicenna).

Who was ibn Rushd?
And al Ghazali?
The work of ibn Sina
Who was Aristotle?
Plato the philosopher

He knew the works of Aristotle and Plato, too. But in 1348, when Ibn Khaldun was only 17, both of his parents and some of his teachers died in the Black Death.

As an adult, Ibn Khaldun had many adventures and traveled all over the place. Like ibn Battuta, he made the hajj to Mecca. He also visited Morocco and Spain. Ibn Khaldun lived in Egypt for a long time, where he lost his wife and children in a shipwreck. As a representative of the Egyptian army, Ibn Khaldun met the invader Timur, and got to know all about the Mongols.

What is the hajj?
Mamluks in Egypt
Who was Timur?

History of the World

When Ibn Khaldun was middle-aged, about 1375-1400 AD, he put together all this knowledge to write a History of the World. Ibn Khaldun was the first historian to introduce the ideas of scientific method to history and economics. He used this method to explain the differences in world-view between nomads and farmers.

What is scientific method?
Nomads and farmers

He also pointed out that empires like the Roman Empire or the Abbasid Empire rise and fall in a cycle. Ibn Khaldun also was the first historian to describe business cycles where the growth of the economy feeds more growth.

Scholars living in the Ottoman Empire were very much interested in Ibn Khaldun’s ideas about the rise and fall of empires. They hoped to find practical messages for the Ottoman rulers. Ibn Khaldun’s work was not well known in Europe until the 1800s. But then it became important to the development of modern sociology and historical thinking.

Bibliography and further reading about the economist Ibn Khaldun: