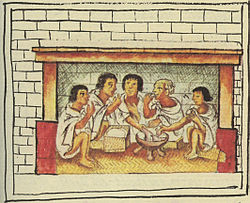 What did early people eat?

When people first came to Central and South America, perhaps about 15,000 BC, they hunted and gathered all of their food. They picked wild potatoes, wild teosinte (the ancestor of corn), wild beans and wild tomatoes and avocados. They hunted rabbits and llamas and turkeys, and fished in the rivers and the ocean. For fun, they probably fermented teosinte and other plants into a kind of beer.

When did they start farming food?

Beginning about 10,000 BC, South American people began to farm some of their food in addition to gathering it. This is about the same time that people started farming in West Asia, halfway across the world. Archaeologists think people in South America started by farming squash.

Where does squash come from? 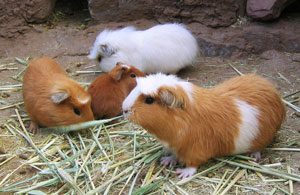 History of peanuts
History of chocolate
Where do pinto beans come from?
And chili peppers? 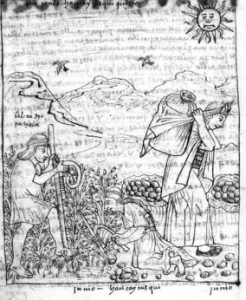 A little later on, perhaps around 3000 BC, farmers began to grow sweet potatoes too. Around 800 BC, Central American farmers began keeping tame turkeys for food. One of the last crops that people started farming was tomatoes, sometime before 500 BC.

Where do turkeys come from?
History of sweet potatoes

How did South Americans cook food?

In South America, Inca women freeze-dried the potatoes so they would keep all winter. Women used these dried potatoes to make stews and soups spiced with chili peppers, often with peanut sauce. But in Brazil and Paraguay, people ate bread made from yuca root, also with spicy peanut-chili sauce. People also ate a lot of corn. They also dried llama meat into a kind of jerky – our word “jerky” comes from the Inca word “charqui”.

Where are llamas from?
How about yuca root? 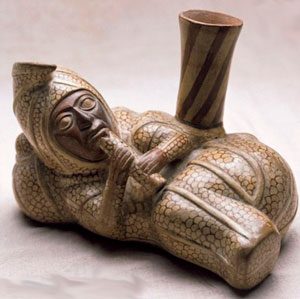 Moche image of a peanut-man playing an instrument

How did Central Americans cook food?

In Central America, people’s normal food was a lot like what you know as Mexican food. People wrapped flat corn tortillas around refried beans, tomato and avocados. They added fish, turkey, and chili peppers for flavor. For fat, they mainly used the oil from crushed squash seeds, like our safflower oil.

Central American people also ate tamales, cooked in corn husks (our word “tamale” comes from the Aztec word for “wrapper”), and tortillas made with turkey eggs.

History of popcorn
And chewing gum

Learn by doing: go out to a Peruvian restaurant or eat Mexican food
More about the history of potatoes

Bibliography and further reading about Central and South American food: