Who was Minerva? The Roman goddess Minerva

The god Minerva: A Roman temple from the forum in Ostia, near Rome. It was probably dedicated to Jupiter, Juno, and Minerva.

Is Minerva the same as Athena?

Who was Jupiter?
And Juno?
The Roman god Venus
More about  Athena
Roman religion
All our ancient Rome articles

Was Minerva an Italian god?

Minerva’s name comes from an older Etruscan god, and that comes from an even older Italian god Meneswā. Meneswa was a moon god. Her name means “the measurer”. So she probably had something to do with measuring out your fate — how long you would live. Because she spun out and cut the thread of your fate, she was naturally also the god of spinning and weaving.

Who were the Etruscans?
Bronze Age Italy
History of spinning
What is weaving?
More about the Fates 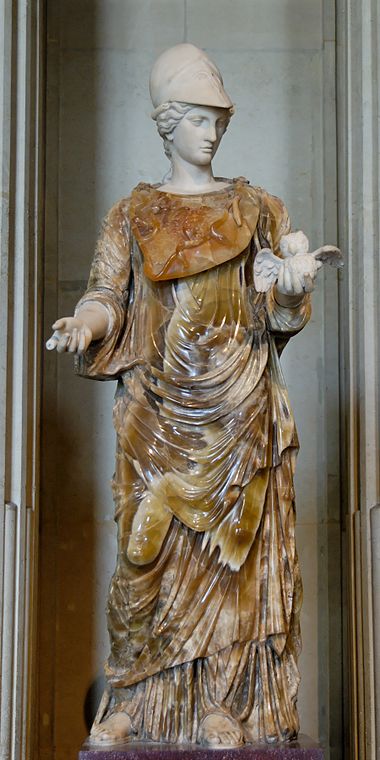 A Roman Minerva in onyx, from the 100s AD. Now in the Louvre. She’s holding her owl.

By Roman times, Minerva was the god of wisdom, like Athena, but she was much more a god of strategy in war. Minerva was also the god of medicine and doctors.

Roman wars and the army
Roman medicine and doctors

The Romans often thought of Minerva as part of a group of three gods, Jupiter, Juno, and Minerva. They seem to have gotten this idea from the Etruscans. Many Etruscan and Roman temples were dedicated to all three of these gods together.

The temples of ancient Rome

So what about Minerva’s connection to Athena then?

People in Italy had already been worshipping Minerva for a long time before they met anyone from Greece. But when the Etruscans and Romans did hear about the Greek god Athena, they thought she sounded like their god Minerva. They were both gods of war, and wisdom, so they seemed to go well together.

The Roman poet Ovid and Minerva

When did people stop worshipping Minerva?

People kept right on worshipping Minerva all through the Roman Empire. But when most people converted to Christianity in the 300s and 400s AD, they started to think of the older gods as demons. So they didn’t worship Minerva any more then.

More about the Greek god Athena
More about Roman religion

Bibliography and further reading about the Roman god Minerva: