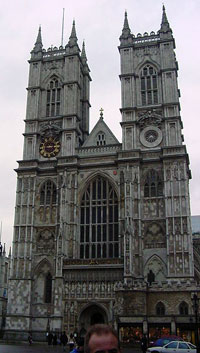 Westminster Abbey is a large church in the Gothic style in London, England. Edward the Confessor built an abbey here in 1050 AD, in the Romanesque style. (An abbey is a place for monks or nuns to live and pray)

William the Conqueror was crowned in the Abbey. And since his time all English kings and queens have also been crowned there, right up to now. But by 1245, that old Romanesque church seemed hopelessly old-fashioned. By now the kings of England were richer (maybe thanks to the Medieval Warm Period). So Henry III decided to tear the old abbey down. He would build a much bigger new church in the Gothic style. 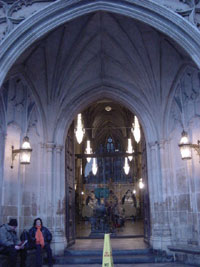 But the English got a little too ambitious and ran out of money. The facade (the front) of Westminster Abbey wasn’t actually finished until the 1400s AD. Because of this, it is in a Late Gothic style which is much more vertical. Most of the lines go up-and-down and not across. (They didn’t build the two towers until the 1700s.)

Elevation of the nave of Westminster Abbey

Unlike the doors of Italian or French cathedrals, the doors of Westminster Abbey are relatively plain. They have beautiful lacy garlands but no statues. They don’t tell a story.

Inside, the main nave of Westminster Abbey rises in three storeys. There is one big pointed (Gothic) arch at the bottom, then a blind (false) gallery. Above that a big glass window lets in the light. Thin colonnettes attached to the wall rise straight up from the floor to the ceiling. They make the ceiling seem as high as possible. It’s as if the whole building were soaring up to the sky, trying to leap right up off the ground to Heaven.

In the overall plan of the church, the architect, Henry of Reyns, was mainly taking his ideas from earlier cathedrals built in northern France. He was thinking especially of the cathedrals of Chartres, Reims, and Amiens, which had just been built. Like the French cathedrals, Westminster Abbey has a round apse with radiating chapels, rose windows, and flying buttresses. Although this nave more or less follows the original plan from 1245, it was actually built a hundred years later, in 1376. They had to stop for a hundred years to raise enough money!

The stone vault of Westminster Abbey

The vault of the roof shows that the nave was not built until the 1300s. It is a later Gothic style. The vaults are fancy ones with a lot of unnecessary ribs just to look more beautiful. From the outside of the church, we can see how the builders held up a heavy stone roof when the walls had such big windows in them – by using flying buttresses. To buttress means to hold something up, and you can see the flying buttresses – they are stone arches pushing against the walls to hold them up. At the bottom end of the flying buttresses they connect to regular non-flying buttresses which also hold up the roof.

Learn by doing: a medieval tournament
More about the Tower of London