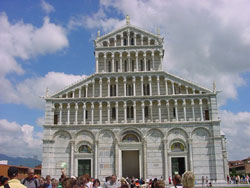 We call this kind of building Romanesque because it is a little like Roman architecture, with its columns and round arches. But people built Romanesque buildings around 1000-1200 AD instead of during the Roman Empire.

The fall of the Roman Empire, about 500 AD, made everybody in the empire poorer than they were before. But the people living in Europe were much poorer. In the eastern and southern Mediterranean, people weren’t as poor. They went on building big stone buildings. In 532 AD, Justinian built Hagia Sophia in Constantinople. In 691, Abd al-Malik built the Dome of the Rock in Jerusalem. In 706, al-Walid built the Umayyad Mosque in Damascus, and in 784, Abd ar-Rahman I built the Great Mosque of Cordoba in Spain.

By this time the Europeans had begun to recover a little from the fall of Rome. They wanted some new stone buildings themselves. In 792 AD, Charlemagne built a palace and chapel at Aachen, in northern Europe. 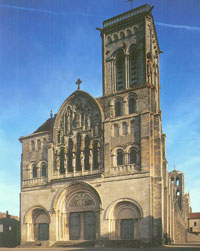 Romanesque buildings were made of stone. But they often had wooden roofs. European architects were not very good at building stone roofs yet. If they did have stone roofs, the walls had to be very thick in order to hold up the roofs, and there couldn’t be very many windows either. So Romanesque buildings were often very heavy and dark inside. That was fine, since most of the buildings were in southern countries where it was often very hot, and these buildings stayed nice and cool: free air-conditioning! Usually architects designed Romanesque churches so that the main doors were on the west side and the altar was on the east side. This meant that people prayed facing Jerusalem, where Jesus was crucified, but it also let more sunlight into the dark churches.

Romanesque churches had round arches, like Roman buildings, and decorated column capitals like the Romans too. Only Romanesque capitals often have carvings of people or animals on them instead of plants.

By 1150 AD, the Romanesque buildings were getting bigger and fancier. In 1173 AD, the people of Pisa added a bell tower (the Leaning Tower of Pisa) and a baptistery to their cathedral. But by this time, the armies of northern Europe were conquering southern Europe and taking their money north, where they used it to build Gothic cathedrals. In the south, most people couldn’t afford to build so much anymore.

Learn by doing: build a Romanesque church in Minecraft or in Lego.
More about Gothic architecture