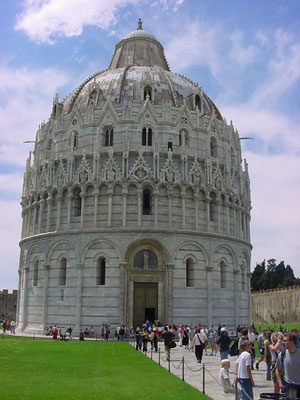 When did Pisa build their baptistery?

This baptistery is where people baptized  their children in medieval Pisa (PEE-za), in Italy. The people of Pisa built their round baptistery in the Romanesque style around 1150 AD.

What is baptism?
Romanesque architecture
Pisa in the Middle Ages
All our Medieval Europe articles

How did Pisa pay for their baptistery?

Pisa was one of many places in Italy that traded by sea all around the Mediterranean. Pisa’s traders sailed ships to Tunis and Cairo.

Saladin and the Ayyubids
The Almohads in Tunis
Almohad architecture

Pisa’s traders bought cotton and silk, paper and sugar, medicine and steel, and they carried them back to Europe. In Europe, Pisa sold all those things to people further north. Pisa’s traders bought wool cloth, furs, leather, and silver and sold them to the Islamic world. Pisa got rich from all this trade – rich enough to build big stone buildings. They wanted to show the world how rich they were.

Because Pisa started to build their baptistery in the Romanesque style, the lower levels have round arches. But by the time they finished building the upper part, architects were changing over to the Gothic style. So they made the upper windows with the new fashionable pointed arches.

The inside of the baptistery, where people were baptized

What is the Pisa baptistery made of?

The outside of Pisa’s baptistery is covered with white marble. It’s just across from the earlier Cathedral and the famous leaning tower.

What is marble?
Pisa’s cathedral
The leaning tower of Pisa

Why does Pisa’s baptistery have stripes?

Compare this baptistery to the baptistery in Florence, very close by. The people of Florence built their baptistery just a little earlier. Probably Pisa’s architect wanted to build something a lot like what Florence had. But Florence’s baptistery may have gotten its ideas from even earlier buildings. Some of those buildings were Christian, like Charlemagne’s chapel at Aachen. Others were Islamic, like the great mosque at Cordoba, or the Dome of the Rock in Jerusalem.

Learn by doing: find a building that uses marble and check it out
More Romanesque architecture