As the Romans were conquering the whole Mediterranean, the rich men who were running the government got richer and richer – very very rich. They began fighting each other to rule the new empire. By 30 BC one man – Augustus – was ruling the Roman Empire. After Augustus died, his relatives inherited his throne.

For the next two hundred years, the Roman Empire enjoyed a long peace while one man after another became Roman Emperors. Some women, like Agrippina and Julia Domna, also held power. But about 220 AD, the Sassanians began to attack the Roman Empire more aggressively from the East, and the Germanic peoples to the North took advantage of this to attack also. In order to get enough soldiers, the emperors had to hire Visigoths and Ostrogoths from outside the empire to fight as mercenaries. 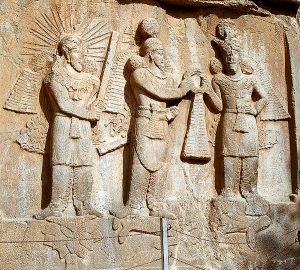 A time of peace allowed the early 300s AD to be a relatively good time for the Roman Empire. But the wars began again in the 350s, and even though they fought well, by the late 400s the emperors had to abandon much of the Western Empire to the mercenary troops who had once worked for them.

In the eastern Mediterranean the Roman Empire still continued, with its capital at Constantinople. But as in the West, the Romans were increasingly using mercenary soldiers, especially Arabs. By the 600s, those Arabs also began to fight Rome instead of helping, and they soon established the Islamic Empire in place of the Roman one. The last little bit of the old Roman Empire – the capital at Constantinople – fell to the Ottoman Empire in 1453 AD.