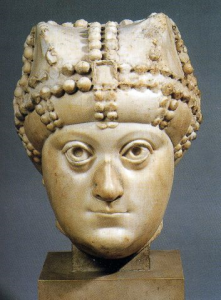 The Byzantine empress Ariadne, who married Anastasius. Now in the Louvre museum in Paris

When the Roman Emperor Zeno died in 491 AD, his widow Ariadne chose one of Zeno’s advisors, Anastasius, to become the new emperor (and she married him too).

Back to Zeno
All our Roman Empire articles
Early Medieval articles

Zeno left the Empire in good shape, with plenty of money in the treasury. Anastasius was an older man when he became emperor, in his early sixties. He was very careful with money. So the Roman treasury did very well under Anastasius as well, though he got a reputation for being a skin-flint (a miser).

Anastasius fought a long war with the Sassanians. The war finally ended after three years. Both sides were so tired out that they agreed to just give back whatever they had conquered. They left everything the way it was before the war began.

Who were the Sassanians?
Sassanian rulers of the 400s AD 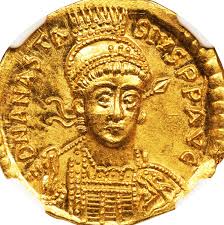 Anastasius I on a gold coin

Anastasius lived to be very old – nearly ninety! He had a long reign and a long marriage to Ariadne. Ariadne died in 515 AD, and Anastasius followed her three years later in 518 AD, without any sons. Justin, who was the captain of Anastasius’ bodyguards, made himself emperor. He announced that he had been Anastasius’ choice, though that’s probably not true. 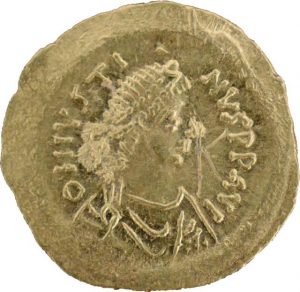 A gold coin of Justin I: can you find where it says IVSTINVS for Justin?

Justin, like Anastasius, was also an old man when he got into power. He was about 70 years old when Anastasius died. Because he had always been a soldier, people said, he didn’t know how to read or write. Justin didn’t know much about running an empire. So he depended on his advisers, who luckily did a good job.

One of Justin’s main advisers was his nephew Justinian. When Justin got sick, in April of 527, he named Justinian as his successor. Justin died in August of the same year, and Justinian became emperor.

Bibliography and further reading about Anastasius and Justin:

Oxford Children’s History of the World, by Neil Grant (2000). A general history of the world for kids. Good place to start.

Constantinople: The Forgotten Empire, by Isaac Asimov (1967). This book for kids got many future Byzantinists started on their path. It’s out of print, but you can get it used.