In the 200s AD (the third century), the Roman Empire had a very hard time. Climate change was making the weather cooler, and that may have ruined people’s farming. Another reason was that the Romans were constantly being attacked by the Sassanids in the East and at the same time by the Germans in the North (maybe looking for warmer weather). It was very expensive to fight two wars at the same time, so that taxes had to be very high, and people were unhappy at having to pay such high taxes.

Also, the Roman Emperor could not lead both armies at the same time. So he always had to choose some general to lead the other half of the army. Either the Emperor fought the Sassanids, and the army fighting the Germans had only a general to lead them, or the other way around. But whichever army only had a general to lead them would get jealous. Often they tried to make their own general the Emperor instead. Sometimes they won, and sometimes they lost, but this meant that the two halves of the Roman army spent a lot of time fighting each other instead of the Sassanids and the Germans.

Many rebellions inside the Roman Empire

And, because the ordinary people were so unhappy about their high taxes and the climate change, it was pretty easy to get them to revolt too. So there were a lot of smaller rebellions during the 200s AD, and the armies had to fight them as well. 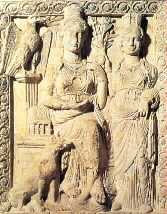 The empress Zenobia of Palmyra

One of these rebellions was in Palmyra (pall-MY-rah), a big trade city near Arabia in West Asia (modern Syria). The king of this area, Odoenathus (oh-doy-NAH-thuss), had been under Roman power for many years, but then he decided to strike out on his own. When he died, his wife Zenobia (zen-OH-bee-ah) took over rule on behalf of their young son.  The Sassanian ruler Bahram sent an army to help her. But eventually the Romans did take Palmyra back, and they took Zenobia to Rome as a prisoner, in golden chains. It seems she was a big hit in Rome at parties, and lived to be old and had a good time.

Because emperors kept being killed in battle or by the rebellious soldiers, there were many emperors during this century. Hardly any of them lasted even five years. So we will not bother to list them all here.

Learn by doing: compare the situation in Syria in the 200s AD with the climate crisis in Syria today
More about Diocletian and the Tetrarchy

Bibliography and further reading about the third century crisis:

The Roman government’s response to crisis, A.D. 235-337, by Ramsay MacMullen (1976). MacMullen is a very well-known and well-loved historian, though this isn’t his best-known work.

Palmyra and Its Empire : Zenobia’s Revolt against Rome, by Richard Stoneman (reprinted 1995).

The Roman Empire from Severus to Constantine, by Pat Southern (2nd edition 2001).