Who were the Illyrians? 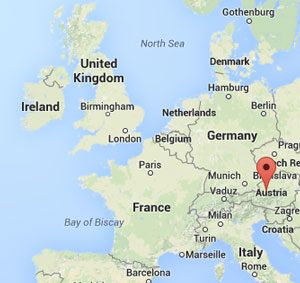 Red arrow shows where Hallstatt is – later the center of the Illyrians ‘ power.

About 5000 BC, not long before the end of the Stone Age, the Hallstatt group of people in Central Europe, in what is now Austria, began to dig salt out of salt mines and sell it to their neighbors. Salt was expensive, and the Hallstatt people soon got very rich.

History of salt
What is salt made of?
The European Stone Age
All our Northern Europe articles

The Hallstatt people got even richer when they started to keep pigs. They used their salt to make excellent bacon and ham and sausage. When the Indo-Europeans arrived at the beginning of the Bronze Age, the local Hallstatt people began speaking their Indo-European language, but they kept on mining salt and making sausage, and they kept on being rich and powerful. They sold their meat to the Romans and the Greeks for even more money. 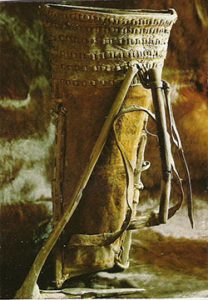 A miner’s backpack for salt (Hallstatt)

Facing competition from Rome and Greece and other European people starting around 500 BC, local chiefs began to build stronger states and more fortified towns throughout the Balkans. The Greeks called these people the Illyrians, though they probably didn’t have a name for themselves as a group.

Who was Alexander of Macedon?
Empires timeline 500 BC – AD 1

By the 300s they had a king, Bardyllis, and some Illyrians were pirates; they fought battles with Alexander of Macedon. Then Celts conquered the original Hallstatt homeland, which became known as Noricum.

Queen Teuta and the Romans

The Romans conquered the Illyrian queen Teuta in the 200s BC, solving the pirate problem; they conquered Noricum a little later, gaining control of the salt mines. Under Roman rule Noricum kept producing salt, and also became an important source of iron and early forms of steel for Roman weapons. Noricum traded salt and steel for glass from Cologne in northern Europe, and for Gaulish pottery.

As the Roman empire got weaker in the 600s AD, the invading Slavs conquered the Illyrians from Central Asia, and most Illyrians started to speak Slavic languages.

Who were the Slavs?
Who was Charlemagne?

Further west, though, Noricum and its salt and iron mines fell under German control, and then became a valuable part of Charlemagne‘s empire and his defense against Slavic invasions. In the Middle Ages, it was valuable to the Holy Roman Empire, and after that, it was the heart of the Austro-Hungarian Empire.

Learn by doing: a project with salt
More about Iron Age European history