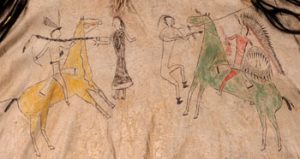 Cheyenne history changed when they got horses (Cheyenne painting on bison hide, 1800s)

When did Cheyenne people meet Europeans?

In 1680 AD, Cheyenne people were living around the sources of the Mississippi River (in modern Minnesota), when they sent representatives to meet with French fur traders at La Salle’s fort and urge them to come to their country, where there were plenty of animals for fur trapping.

Why did the Cheyenne move west?

Why were the Sioux moving west?
American houses

When did the Cheyenne get horses?

Horses in the Americas
What’s the Pueblo Revolt?
More about bison

Why did the Cheyenne stop farming?

Some Cheyenne people ended up as far west as southern Colorado. In Colorado and Montana Cheyenne people had to give up on farming and, like the Crow and the Sioux, Cheyenne people began living by using their horses to hunt bison. Like other people of the Great Plains, they began to live in tipis. 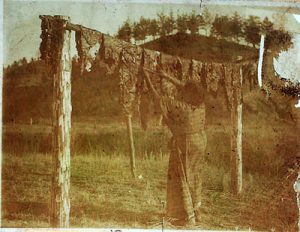 In the 1800s, the Great Plains were crowded with Native Americans. White settlers had pushed them all off their land and they had nowhere else to go. Cheyenne men fought wars with the Crow, who were also being pushed on to the Great Plains, and with the Kiowa to their south. In 1849, a cholera epidemic further reduced the numbers of Cheyenne: as many as two-thirds of them may have died of it.

The US army fights the Cheyenne

By 1850, the United States was trying to settle the Great Plains as well as places further east, and Cheyenne men engaged in a series of wars against the United States Army to try to keep some land. The end of the Civil War in 1865 meant that many more United States soldiers came west to fight the Cheyenne.

What is the Civil War?

So by 1879 the United State Army had forced most Cheyenne people to live on two reservations. One reservation is in southeast Montana, and the other is in western Oklahoma.

There are still many Cheyenne people today. There are many more than there were in the late 1800s. Today, most Cheyenne people have jobs. Many work as foresters, fire fighters, and in other ways preserving their land.

Did you find out what you wanted to know about Cheyenne history? Let us know in the comments!

More about the Cheyenne’s neighbors: the Crow