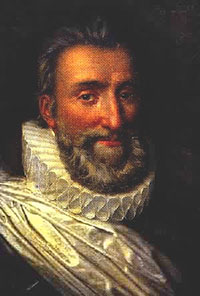 In 1589 AD, Catherine de Medici died in France, and her last son, Henry III, was killed a few months later. Henry III had no sons, and after a short civil war his 36 year old cousin, Henry IV, became the next king of France. Henry IV was young(ish) and cool, and he was popular. He told people if they made him king he would put “a chicken in every pot.”

Henry was a Protestant, but he converted to being Catholic in order to get the support of Catholics in France, saying that “Paris was well worth a Mass.” This helped to end the wars of religion in France. In 1598, Henry IV signed the Edict of Nantes, allowing freedom of religion to everyone in France.

In the Americas, Henry’s troops made alliances with the Algonquin people to trade with them and help them fight the Iroquois. Henry also made plans with the Ottoman ruler Sofia Baffo to attack Spain and the Holy Roman Empire.

More about the Algonquin
Who was Sofia Baffo? 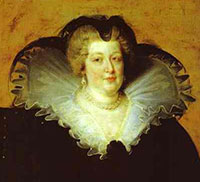 But in 1610 a Catholic man who hated freedom of religion killed Henry IV. When Henry died, he was 57 years old. After Henry died, his wife, Marie de Medici, ruled France as her cousin Catherine had before. She was regent for her 9 year old son, Louis.

Marie’s mother was Austrian, so Marie dropped Henry’s plans for war with Austria. Marie even had her son marry an Austrian-Spanish princess, Anne of Austria, one of Philip III’s children. But Marie continued Henry’s policy of buying off the rich lords instead of fighting them, and she continued freedom of religion.

Who was Philip III? 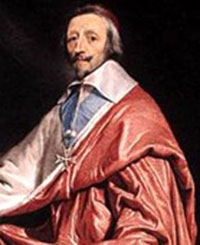 Seven years later, when Louis XIII was sixteen years old, Marie lost power to Cardinal Richelieu, a powerful Catholic cardinal at court. Richelieu got Louis to exile Marie, and she lived the rest of her life in Germany.

What is a cardinal? 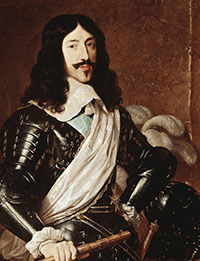 (The story of the Three Musketeers is about Richelieu and Louis XIII.) Richelieu didn’t mind fighting Austria as Marie de Medici had, so he led France to victory over Austria in the Thirty Years’ War. Louis XIII’s wife, Anne of Austria, didn’t like this war with her home country, and she may have worked to help her brother’s side instead of her husband’s. Anne also tried to help her mother-in-law Marie get back into power.

Richelieu and the Americas 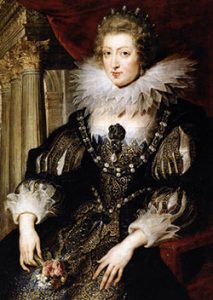 Under Richelieu, Louis (or Richelieu) got more power, and the rich lords had less and less. Richelieu sent out Jesuits who encouraged his Algonquin allies in Canada to become Catholics. But he didn’t give the Algonquin enough guns to defend themselves against the Iroquois, and by 1632 they were very weak.

Who were the Jesuits?
More about the Iroquois

Also, Richelieu sent out soldiers to conquer some of the Caribbean islands and enslaved Africans to grow sugar there.

Sugar and slavery
The Caribbean islands

For many years, Louis and Anne didn’t have any children. (Anne had a lot of miscarriages.) Finally they did have one: Louis XIV (and later he got a little brother). Richelieu died in 1642, and Louis died the next year. But Louis XIV was still a baby. Louis’ wife, Anne of Austria, ruled France now.

Go on to Anne of Austria