The Vikings settle in northern France

Around 1000 AD, some of the Vikings who had been raiding France got permission from the French king to settle down and live in France instead.

Who were the Vikings?
Who was ruling France?

These Vikings were supposed to help protect France against other Vikings (as the Visigoths had done before). As part of the deal, these Vikings also converted from their Norse gods to Catholicism.

More about the Norse gods

People called these settlers the Normans (which is short for North-Men, because they came from the North). The part of France where they lived is called Normandy, the land of the North-Men, even today.

Animated version of the Bayeux tapestry showing the invasion of England

After a while, though, the children and grandchildren of these Vikings were tired of just living in Normandy and farming, and wanted some adventure and a chance to get rich. In 1066 AD, one of these men, William, decided to attack England and try to conquer it from the people who were living there.

Williams’s mother had not been married to his father when he was born, but William still inherited his father’s property and his title of Duke of Normandy. People called him William the Bastard (that means that his parents were not married). He lived in Caen, in northern France.

William wanted to do something big and adventurous, so people would stop calling him names. When the King of England died without leaving a son, William thought he saw a chance to take over England.

More about William’s own marriage to Matilda. 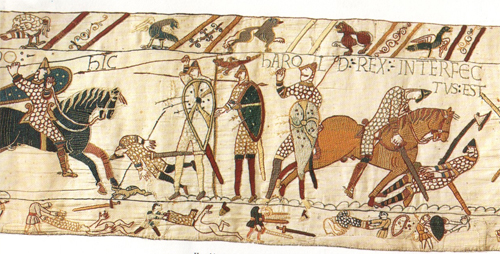 The Battle of Hastings 1066

William thought if he conquered England he might get rich. A lot of his friends agreed with him.
So they sailed across the English Channel in a lot of small boats.

When they got there they did beat the English in the Battle of Hastings. The English king, Harold, got shot in the eye with an arrow and died.

When were bows and arrows invented?

The Tower of London

William (now people called him William the Conqueror) became the new king of England. He was crowned in Westminster Abbey. He built the Tower of London to live in, to keep himself and his family safe. William and all his friends spoke French, but the English people spoke Saxon. So for a long time rich people in England spoke French, and poor people spoke Saxon or English.

New England on the Black Sea

Some of the English seem to have left England about 1074 and sailed away to the Black Sea, where they started their own country of New England with their own city of New London. Many of them fought in the bodyguard of the Byzantine emperor Alexius.

A blog explaining the evidence for this “New England”

But the Normans never really settled down to just stay at home in England either. They also fought as mercenaries for the Byzantine kings and the Lombards in Italy, they invaded Greece (where they probably fought the New England Saxons), and by 1096 they were off in Jerusalem fighting the First Crusade.

The Battle of Manzikert
What’s the First Crusade about?

Bibliography and further reading about the Normans: