Tower of London – William the Conqueror 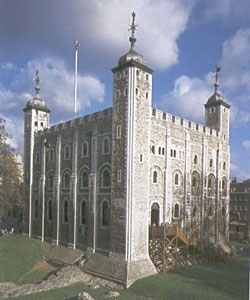 To build his new castle, William brought some of the stone over on boats all the way from France. He had just finished building a castle there at Caen, his home town.

William built the White Tower in a Romanesque style, with rounded arches. Long narrow buttresses helped to support the heavy stone walls. Like the walls of Cairo just a little later, William’s walls have crenellations on the top. Crenellations are little walls that men could hide behind while they were shooting arrows at their attackers. (Most of the windows you see were added later). 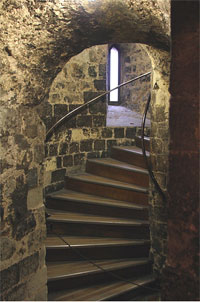 A spiral staircase in the White Tower

Inside, the White Tower originally was only two stories high. You walked up and down on spiral staircases. 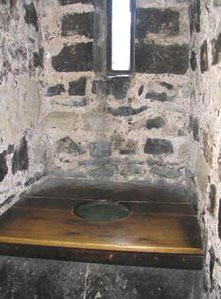 A latrine in the White Tower

Built into the wall, William had several latrine toilets. They’re just a board with a hole in it, and a long chute down to the ground. William also had a well built into his castle. That way he could get water without going outside if someone attacked the castle. 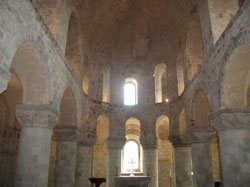 Chapel inside the White Tower

One of the rooms was a Romanesque chapel where William could attend Christian Mass without having to leave his safe castle. (Except that actually William died before his castle was finished.)

A beefeater tells about the Tower of London

In the 1100s, King Richard built another stone wall around the White Tower, to be extra safe, and dug a moat. Later kings also worked on the Tower, and continued to live there sometimes until after 1500 AD.

Learn by doing: a project about castles
More about Castles